← Memoirs of Memoirs: the Real Leningrad Sinologist | Alistair Noon
A Piece of my Mind | Mark Goodwin → 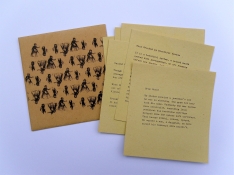 Is that you father?
Are you not the citizen Antoine
swallowing your fingers purple with weals?
Choke your tears, drown that waltz
quickly gather your papers and fears
the light is finishing.
The modern city is burying its enemies.

‘Proposal for a Cenotaph’
Andrew Hirst, 1998

In spring 1998, the poet Andrew Hirst (aka photographer Karl Hurst) gave a reading with Ken Smith at the Graves Gallery in Sheffield. In spring 2013, the memory of this reading is still exercising me. In particular, two things stand out. The first is the conviction in Hirst’s voice, especially stark in the formal setting of the gallery. I recall him pausing between poems, tilting his eyes to the ceiling, and intoning: ‘Is that you father?’ The poem continued after a (long) beat; the air seemed to thicken in that pause. The second is the hand-printed poetry sampler given by Hirst to each member of the audience as they arrived (as I recall, he’d spent the best part of two days assembling them). Each of the wallets contained a different selection of poems; the covers and the typesetting were all marked by subtle variations. The poems and the covers were by him, but he left his name off. It wasn’t a calling card. It wasn’t a manouevre. It wasn’t a bid for recognition. It was a gift. It was an open-handed gesture. It was for nothing.

Hirst’s craft and conviction – in both production and performance – struck me as unusual even then. I’d attended only a handful of poetry readings, but was already seeing a pattern of amateurishness, self-congratulation and personal ambition, and was beginning to drift away. Hirst’s performance pulled me back. It showed that you could be uncompromising and generous, difficult and direct; moreover, it proved (to me, anyway) that most of the props and conventions of the contemporary poetry reading were just that – props and conventions. His reading owed more to Brechtian theatre than the standard fare (and formalities) of the UK poetry circuit; the conditions that had shaped each poem seemed to be remaking the work in the moment, for the moment. On paper, many of the poems sat awkwardly, sometimes necessarily so. Hirst’s exposure to certain European and Russian writers (Hans Magnus Enzensberger, Osip Mandelstam, György Petri) and others closer to home (John Clare, Ken Smith, Stevie Smith) was still raw and close to the surface. He was working through his influences and working out his position, but the voice, and the use he made of that voice, was – and remains – unique. What he does with it is necessary; it isn’t comfortable, but it is necessary. 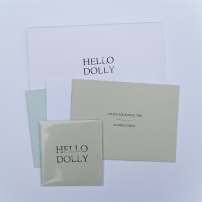 It was a shared sense of necessity that led to us starting Longbarrow Press several years later. It was necessary for us to develop the press on our own terms and at our own pace, using the limited resources at our disposal. It was necessary that our publications and events should be of the world and in the world, and not the product or the preserve of an institution. Most importantly, it was necessary for the craft and conviction that Hirst had displayed on that evening in the Graves Gallery to suffice as our founding (and abiding) principles. His self-made film of his poem ‘Chappaquiddick, 1980’ (an imaginative recasting of the rhetoric of Teddy Kennedy) reaffirms this conviction; this audio recording of ‘Welund’s Lament’ (which, with ‘Chappaquiddick, 1980’ and the earlier poem ‘Tithonus, 1972’, appears in his current publication, Hello Dolly) is no less compelling. ‘A poem should last you a lifetime’, he maintains in this recent podcast. The value of a true gift – given without expectation of reciprocity or recognition – will not depreciate.

Andrew Hirst’s Hello Dolly (three pamphlets and a 3″CD in a handmade, hand-stamped wallet) is available to order here. Listen to ‘Welund’s Lament’ here. Click here for a short film of ‘Chappaquiddick, 1980′. A downloadable podcast of Hirst discussing ‘Hello Dolly’ (and a wide range of related topics) is available here.