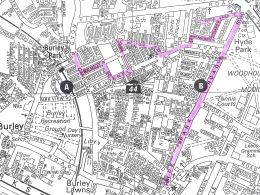 The territory marked out in ‘Lost Between Stations: 6’ (route highlighted in purple)

The first of the two short films I made in response to Matthew Clegg’s narrative sequence Lost Between Stations (Longbarrow Press, 2011) was an attempt to find a balance between the literal (shots and techniques denoting the poem’s journey through an estate in Leeds) and the suggestive (images chosen for their ‘tone’).  The results were somewhat mixed.  Lost Between Stations: 6 is, on one level, the story of a young man adrift on the streets of Burley and Hyde Park, unsure of his bearings and searching for his moral compass.  The film tries to match the poem’s internal monologue with stark, fixed-frame footage of spiked railings, high-walled compounds, shuttered doors and deserted streets (filmed on location in Burley and Hyde Park during a visit with Clegg in 2008).  While the images are faithful to the poem’s locale, the shifts of scene multiply, accelerate and cram as the film attempts to evoke both the physical territory and the protagonist’s state of mind.  Consequently, the pace of the film is too busy to allow the viewer to fully digest the poem, or to reflect on the relationship between the images and the words; the visual field too cluttered to allow the eye to pick out a central image (or thread of images).  The city that emerges from this choppy track is crowded and depopulated, fast-moving and static.  If the film does achieve certain effects, these are cumulative; the most striking moments occur in the last minute, when the unease and dislocation that have been building for most of the poem find their correlatives in the tense, jumpy rhythms that fill the screen.

In contrast to the over-determined storyboarding of Lost Between Stations: 6, the second film arrived almost entirely by accident.  In 2010, I made a bus journey from Headingley to Leeds city centre.  At the start of the journey, I unwittingly triggered the ‘record’ button on my camcorder; on realising my error some minutes later, I switched the machine off and thought no more of it.  When I reviewed the footage from that period a year or two later, I found that a minute or two of the filmed bus journey might be usable for one of the film projects.  I began to import the digital file to my laptop, and then noticed that something had gone awry with the file conversion – it was beginning to corrupt.  The image was still recognisable, but heavily fragmented, pixellated and ghosted.  A coding error.  I waited for the conversion to end and then re-imported the file (this time successfully).  I now had two versions of the same film: one ‘clean’, one ‘corrupt’.  Both versions offer the same narrative: a fixed-view tracking shot of a busy road, moving from suburb to centre, filmed from the top deck of a bus.  Most of the journeys in Lost Between Stations follow the protagonist from the centre to the suburbs (or beyond the suburbs); however, there was something about this footage that brought to mind the second poem, in which a ‘moment of crisis’, sudden and brutal, occurs halfway through (unlike Lost Between Stations: 6, which steadily builds towards an internal crisis).  It also seemed fitting that the sequence, which draws much of its energy and momentum from chance encounters and unexpected turns, should be answered with a film that was itself an unrepeatable accident.

Assembling the film required little work.  I took the audio recording of the second poem, and matched the first few minutes of the ‘clean’ film to the audio.  At the ‘moment of crisis’, I switched to the ‘corrupt’ version (continuing the journey along the bus route at the point at which the ‘clean’ version breaks off).  This is the only significant edit in Lost Between Stations: 2: the pulse and echo of the film are channelled through its breach.  The meditative, uncluttered first few minutes allow the viewer to build relationships with (and between) the world of the poem and the world of the film; relationships that survive the ‘moment of crisis’ that breaks both worlds open.  In spite of the rupture, the speaker continues the journey, albeit at a remove from the passing world: dazed, dislocated, yet oddly lucid.