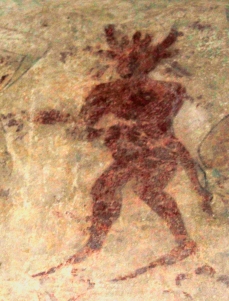 A painted demon, St John the Evangelist, Corby Glen (the next church after St Andrew’s, where light levels defeated our attempts to photograph the devil). Photograph by Emma Bolland

I point at sinister and say to Brown
there’s ones like you, stewing in sex…
But Hell’s not prised for Brown’s gathered elect.
And you, old man, do you rise or go down?

Death and the Gallant, Chris Jones

What shape does the devil take? What is the colour of evil? How much ‘dark matter’ does it take to weigh us down? In the ‘Doom’ painting (a name often given to depictions of the last judgement), dated to 1380 and filling the entire Chancel Arch in St Andrew’s church in Pickworth, a ‘swim of souls’ (Jones, ibid.) ascending into heaven are counterbalanced by a suffocating net of the damned, hauled hopeless into the gaping maw of Hell. The landscape of heaven sitting to the right hand of Christ is a noncommittal pastoral. How does one depict that hazy notion of Nirvana? The environs of evil, both figuratively and literally speaking, are on the other hand, even in their abraded, ‘desecrated’ state, vividly drawn with cauldrons, flames and leering demons of unequivocal iconography. Evil is easily described and given shape. We see it clearly, located in our particular visions of ‘the other’, formed in the image of that which is not us.

The word ‘blasphemous’ comes to us from the Greek: blapsis = evil + phēmē = speech. To be blasphemous is to speak (and I include the word of ‘image’ here) evil. Within the institutional structures of faith, the malevolent utterance is defined in relation to that which is sacred; or, more importantly, those linguistic or visual devices adopted to serve such definitions, and in some interpretations, will constitute a sin that is beyond redemption. The new Protestantism of the Reformation had to differentiate itself from that which it now positioned as the other – Catholicism – by adopting the word as its definitive tool. It became the faith of scripture, of language, and thus the Catholic emphasis on the visual, the figurative representation of doctrine through painting and statuary, had to be condemned as idolatrous and blasphemous in the extreme. Particular attention was paid to the head, the face and ultimately the gaze. The common iconoclastic belief was that evil could enter in through the eyes, by implication suggesting that evil was therefore emitted from the eyes of the idol, evoking primitive anxieties regarding the sorcerous, hypnotic stare. Statues were not merely smashed, they were beheaded; faces not simply painted over – first, their eyes were gouged out. The paradox is that whilst the paintings and statues were condemned as superstitious, superstitious actions were required to properly destroy them.

Snow falls on fire. Saved and damned lie buried
under snow. Christ and his colours
under drifts…

The pre-Reformation supplicant would have sat (or more commonly stood) within a space ablaze with colour. Paintings, statues, decorative ornament flooding their visual field with an unruly display that has more in common with the murals and paintings of a Latin American Day of the Dead or Mardi Gras, than with the spare anti-iconographic aesthetic that we now identify with the Anglican Church. Even in its abraded and faded state, the paintings at Pickworth were shocking and seductive, the smallest trace of pigment conjuring their original saturated viscerality. On our secular September pilgrimage, the Romantic decay of the images and the place allowed us to be lost in wonder – at times I was speechless at these extraordinary sights, flooded with gratitude and emotion at the privilege of standing beneath them – whilst distancing ourselves from the implications of the doctrine for our personal and political selves. Fading chevrons glancing along the stones, the elusive half-shy face of the Madonna peeping sweetly from the interior gloom: my eyes pricked at such things. We stood, enraptured, outside of history – we, who most certainly would have been amongst the damned.

Some of the ideas regarding the nature of blasphemy were first explored in Bolland’s essay Somebody’s Heaven, Somebody’s Hell, written to accompany her exhibition Nightwood, and presented at East Street Arts’ ‘Thought For Food’ meal sharing and seminar series. The essay grew out of an ‘in conversation event’ with the writer David Peace, where Peace and Bolland discussed the mythologies of violent and sexual crime in relation to their own respective practices. The essay has been newly posted on Bolland’s blog and can be read here.

Death and the Gallant appears in the Longbarrow Press anthology The Footing. This is the second blog post focusing on the pre-Reformation wall art of Nottinghamshire and Lincolnshire churches (visited by Bolland, Lewis and Jones on 19 September 2014); the first post, by Brian Lewis, appears here. The third and final blog post and podcast, documenting the visit to Corby Glen, appears here. Listen to Chris Jones and Emma Bolland discuss ‘The Last Judgement’ and the poems in ‘Death and the Gallant’ (recorded at St Andrew’s, Pickworth, Lincs, 19 Sept 2014):