← There is No Wealth but Life | Fay Musselwhite
One-sided walls: revisiting ‘The Frome Primer’ | Brian Lewis →

On Liminal Spaces: 3. Winter Hare at Alport: A Theory of Disappearance | Karl Hurst

“The greatest hazard of all, losing one’s self, can occur very quietly in the world, as if it were nothing at all. No other loss can occur so quietly; any other loss – an arm, a leg, five dollars, a wife, etc. – is sure to be noticed.”
– Søren Kierkegaard, The Sickness Unto Death (trans. Walter Lowrie) 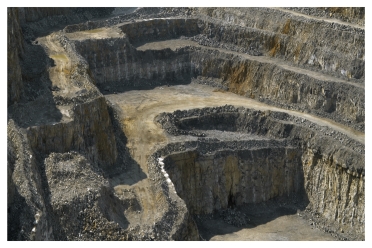 Over the last year, I have spent most of my creative life walking in and photographing certain aspects of landscape. I have also begun to discuss how and why I came to certain decisions during and after the project. It is the opening out of these landscapes into the wider cultural field that I wish to discuss in further detail here. I approach this piece of writing very tentatively. It finds me writing further away from any hub or centre than I might ever have previously imagined or desired. It finds me feeling hemmed in, cornered, startled out of my solitary journeying by the surprise of others. It meets me discouraged by my own nervousness and precarious position. However, I want to share the emotional and critical range of my working practices or else the photographs will just be pictures without context and as such would remain an ostensibly private record.

The photographs in Booths are a document in themselves, and therefore need no further qualification. However, on returning and attempting to put them into a larger meaningful framework, many of the fissures and fault lines I began the series with have again come to dominate my thinking. It ought to have been obvious to me from the outset that many of those wishing to discuss or engage in ideas around spatiality would only do so within an ulterior framework. For example, the growing emphasis on ‘landscape’ or psychogeography as an academic module needs to fill certain criteria by its very nature. These images can’t fulfil those criteria. So they become easier to disparage or conveniently ignore or subtly mock as unsophisticated. It is only really dawning on me now, slowly but starkly, how out of step this way of thinking about space is with my own. 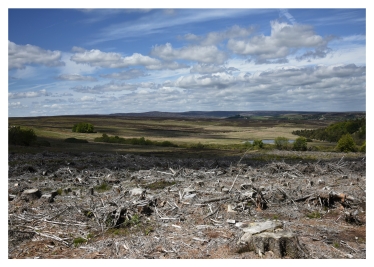 I have discussed elsewhere and at length the aim of Booths as a larger metaphor for the idea of temporary shelter and as a place of safety. The need to find home and its concomitant community, as I have argued previously, is hotwired into us even at the outer limits of an environment. However, I often found this was, in reality, at odds with my need to wander, my desire to disappear and my instinctual disposition for getting lost. Perhaps those who are ostracised, displaced or exiled might better understand a deep hurt transferred as need for silence and space.

The realisation that a landscape is only qualitatively ‘there’ through the projection of those wishing to impose meaning onto it has latterly informed much of my thinking around Booths. It is difficult to marry theorising about spatiality with the physicality of being somewhere for reasons other than those prescribed by an exterior framework. The nature of trespass becomes more than a physical act; it is seemingly also about accessing (or being denied) critical legitimacy. I felt a similar discomfort when I began photographing in areas that, whilst legally accessible, the casual walker was actively discouraged from seeking out. Ostracism or trespass is akin to being lost in the sense that all the reassurances and validity of community are destabilised. It is as if from that point on your insurance or warranty is no long valid; you are stripped of social ranking or status, like John Clare or Van Gogh. For academia, any status that necessitates being permanently lost, unknown or invalidated would be an impossible impasse. Without notebooks, sketches and poems, what can really be said about this ‘dead zone’ of seemingly aimless, untraceable wandering?

From the outset of Booths I always meant to try and undo some errors in previous steps, not to re-trace but to erase, setting out not find myself but to strip back any remaining attachment to the urbane and polite milieu I had spent several years jettisoning. Spending such an amount of time being isolated from human interaction makes it very difficult to be candid on returning. Explaining, justifying, extrapolating: all point away from the purpose of turning towards landscape as internal exile. It seems all the more important to jot down the particulars because this microclimate of thought and sensation is what would disappear. 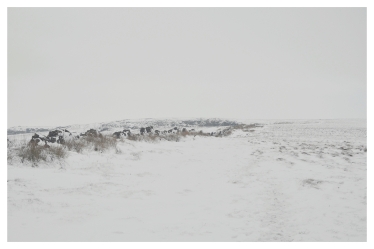 One bone cold afternoon I sat behind a half wall sheltering as best as possible from a screaming wind. Suddenly, right next to me, a huge winter hare stood on its hind legs, startled by my presence. Usually hares dart away as soon as they sense anything close to human contact. But this one was different somehow. It went down onto all fours, like a cub, and sat by me, watching, unafraid, curious even, as if it could sense my benignity. It seemed somehow inappropriate to try to photograph the moment, so I tried to just stay as still as could, enthralled by its presence. Anyway it soon tired of me and went on its way with an inbuilt urgency that wasn’t fear. I too went on my way. Revived by this intimate encounter, the wind seemed to drop a little and visibility lifted just long enough for one or two more pictures. I’m thinking of this now as I remember how I have encountered the human sphere since. I am recounting it as it highlights how many conceptual frameworks can quickly become no more than a convenient attempt to unify disparate experiences or perspectives. Perhaps the hare’s behaviour on that afternoon was unique; simply a reaction to a set of circumstances bound toward each and so specific as to be both unrepeatable and unquantifiable. It might well fit into a larger paradigm of animal/human relationships, but without seeking to document it, the moment provides only a lost desire toward a descriptive absence. These coincidences, this fleetingness, are among the things from Booths that resonate the deepest with me.

The linear rendering of an idealised landscape shows a true lack of engagement. Similarly a faux memory of a family day out and an easy journey back to café or car, a prescriptive route followed as activity, leisure or sport. None of these touch on what the desire to disappear feels like. Cultural tourism is such a hugely prevalent force that it now informs critical thinking at many levels. The idea that you can travel freely with both the fiscal and moral right to do so, ought, at the very least, to start to raise serious questions about how this might not be either possible or desirable for everyone. In 2012 I stopped a certain aspect of photographing in the urban environment for similar reasons. The graffiti, torn posters and peeling paint that I had used as a larger metaphor for other things had just become the new ‘hotspot’ for those seeking a simplified safe lexicon for the urban ‘experience’. One afternoon I encountered a group of photographers on a creative tour of the places I’d been previously photographing without consent to access. I knew then it was time to move on. I don’t mean this as a form of inverted snobbery but rather as an innate fear of cultural redundancy, laziness or overfamiliarity. Hegemony doesn’t strengthen cultural ties but strangles them through excessive production, weakens them by gaining capital through their experiences.

On July 9th 1975 the Dutch conceptual artist Bas Jan Ader set out in a tiny craft to singlehandedly cross the Atlantic. He set a cine camera on a tripod on the beach to watch him disappear into the horizon line, the white triangle of the sail a vanishing perspective. On the night prior to the voyage he had a choir singing sea shanties on the coastline. He was never found or heard from again. He left no clues nor writing as to his intentions but critical momentum and speculation has gathered around the event ever since. I don’t want to expand on the ‘meaning’ of this act here, but have highlighted it as it exemplifies to an extreme degree a part of my thinking about spatiality. I did not seek to understand landscape but to immerse myself so deeply in it as to be absent from anything else but the landscape. To be absorbed, saturated, consumed by a force other than your own, to deplete self-interest to a point where your fear of mortality empties away. Its force is why I went as far into it as I did and choose the harshest of seasons. Now, months later, unlike Ader, I’m back on solid ground and yet the feeling of being lost remains more acute than ever. No critical framework can dispel it from me; no amount of walking can shake it off.

This is the third of three new essays on photography by Karl Hurst (under the series title ‘On Liminal Spaces’); the first essay (‘Reflections on Impracticality’) appears here, and the second essay (‘Meditation on Carl Wark’) appears here. Karl Hurst’s Flickr photosets can be viewed here, including the series Booths from which all five photographs featured in this piece are drawn. Boxed editions of prints are available from his Etsy site. Details of his publications with Longbarrow Press (writing as Andrew Hirst) are available here. His sequence ‘Three Night Walks’ appears in the walking-themed poetry anthology The Footing (Longbarrow Press).