The House of Numbers | Brian Lewis 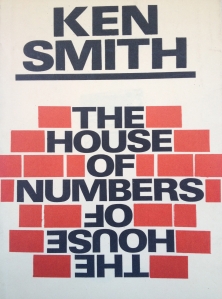 We are entering the capital of a lesser empire
where the plans of our masters surface betimes —
pins on a map at the Ministry of Natural Calamities,
and the statistics like crisp new folding money.

‘Beyond hope and the Lea River’

East London, a March morning, the low zeros: the first spring of a new millennium, the last winter of the old century. I’m on the southeastern edge of Canning Town, looking at the makings of the new ExCel building, under construction near the site of the former Royal Victoria Dock. Opened in 1855, the Victoria Dock was scaled for a new class of steamships; with the Albert Dock (1880) and the King George V Dock (1921) extending to the east, the Royal Docks formed the largest enclosed docks in the world. By 1980, they were empty of traffic, outscaled by Tilbury’s sea-facing container port, the deep basin at the mouth of the Thames. The docks retain their water, the ownership transferring from the Port of London Authority to the Royal Docks Management Authority Limited in the 1980s. The docks retain their titles, and lease them to the new, unmanned metro, the Docklands Light Railway, rolling into the Enterprise Zone, phase by phase, station by station: Royal Victoria, Royal Albert, two stops, an elevated section, surveying the incoming stacks, the hotels and apartments, their flags of no nation. The private water, the corporate border. Shortly before the year’s end I bought a pocket A-Z. It is now useless, the names on the map have been removed from the ground, the white spaces that I came here to haunt have been coloured in. And this is where the map runs out, cutting the airport and regatta in half, two miles east of the meridian. 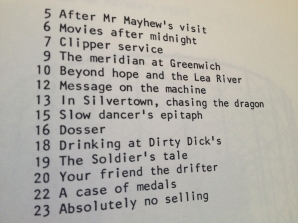 The water running to the west of the Royal Docks is the River Lea, formerly the Essex border, before the county boroughs of West Ham and East Ham were assigned to the London Borough of Newham in 1965. The borough’s eastern boundary is the River Roding, close to where the poet Ken Smith settled in the early 1980s; Smith, formerly of Yorkshire, Exeter, Pennsylvania and Kilburn, would remain in East Ham until his death in 2003. Shortly after the move, he began work on The London Poems, a series of twelve-line poems (each composed of three quatrains) that would form the centrepiece of his 1986 collection Terra. Fourteen of these poems were selected for The House of Numbers (1985), a pamphlet from Smith’s own Rolling Moss Press, accompanied by several photographs by Stephen Parr. The poems and the photographs show the docklands in profile, from the Isle of Dogs to Woolwich, its bad dreams of decline and redevelopment: oblique, caustic and dialectical by turns, the pamphlet has the urgency (and something of the appearance) of a samizdat report from an occupied sector. Observations are recast as allegory; sour jokes are embedded in government policy; enciphered conversations leak from the faulty electrics. A zone of transition, in which almost all transit is suspended, threaded and encircled by ‘miles of wire’, distanced and disconnected from the city it once served. A zone of enterprise, patrolled by snatch squads, paramilitaries and private militias, their allegiance shifting from contract to contract, shadowed by workless ex-soldiers, ex-dockers. The poems are sidelong dispatches, filed on the run, a dossier of riddles, rumours and rhetoric:

My friend Napoleon visits Farina’s Café.
There is no message. He meets no one.
It is mysterious because there is no mystery
but Napoleon is now in the house of numbers.

‘Beyond hope and the Lea River’

The naming of districts in The House of Numbers is metonymic, suggestive, spare; the pamphlet is not a gazetteer or street atlas of East London. No markers, no pins. The poems’ titles (‘In Silvertown, chasing the dragon’, ‘The meridian at Greenwich’) lead us to the edges of the territory. We are left to fill in the blanks. Smith hints at the number and nature of the ‘blanks’ that have been, or will be, created in the residential and industrial sectors; the cleared terraces, the derelict mills, the ‘slow workless docklands going cheap’. Dead and dying space, parts of which will remain dead for a generation, fenced off by prudent developers, before re-emerging as ‘new space’ at the turn of the millennium. The House of Numbers is not so much concerned with the topography of the spaces it reports from as it is with the relationships within and between these spaces, and, in particular, with the people that inhabit them. One consequence of the restructuring of the docklands was that it made the local population less visible; the transfer of some residents from low-rise terraces to tower blocks, the dispersal of others to the ends of the borough, and the gradual disappearance of shops, pubs and amenities left many streets as silent as the docks. As Smith observes in ‘Clipper Service’:

Now the natives are proud and scattered
and lonely in the high rises, living
as they always lived: thieving or work
when there’s work. There’s none now.

The erosion and displacement of these communities was a process, rather than an event. However, two episodes in the last century’s wars made a significant contribution to this process. London was an accidental casualty of the Luftwaffe’s early campaigns; a lone bomber, tasked with a hit on Tilbury, struck the East End instead. The ensuing cycle of retaliation led to the London Blitz, in which the Port of London was a prime target; the raids on the docks also damaged or destroyed neighbouring factories and a substantial amount of housing stock. Some of the most severe losses were sustained in Silvertown, a narrow strip of reclaimed marshland between the Royal Docks and the Thames. Silvertown took its name from the rubber factory established by S.W. Silver & Co in 1852; the company’s decision to open their works in the area may have been influenced by the fact that it was just outside the zone in which ‘toxic industries’ were prohibited (by the recent Metropolitan Building Act). With the development of the docks, other industries followed, including chemical works, flour mills and the rival sugar refineries of Henry Tate and Abram Lyle (merged in 1921). They were joined in 1893 by the Brunner Mond factory, which produced soda crystals and caustic soda. The company ceased production of the latter in 1912; four years later, the production area was still unused, which led the War Office to requisition it for the purification of TNT. On 19 January 1917, a fire ignited 50 tons of explosives, destroying the plant, a fire station, a school and a church, and damaging 70,000 properties. Seventy-three people were killed; more than 400 were injured. Thousands were left homeless. Parliament debated relocating Silvertown’s residents elsewhere, rather than investing in rebuilding; for the 600 houses that fell, 400 new houses were built. Two decades later, the town’s population and infrastructure were further reduced by the Blitz, with hundreds dying over the months of the campaign, and hundreds more dispersed through war service or evacuation, many of whom would never return to the area. Some of the blanks were filled in after the war, with prefabs and new shops, a decline slowed by partial reconstruction. And some of the blanks remained blank: the grounds of the devastated TNT plant still unbuilt and empty at the century’s close, shrinking from each renewal, a white, wrinkled scar.

And no one to remember. No messages
passed late at night across borders, by hand,
by word of mouth, we who are lost together
telling tales the prisoner spins the jailer.

‘The meridian at Greenwich’

The docks divide, west from east, Victoria from Albert, a swing bridge stuck between Canning Town and Silvertown, two lanes southbound, two lanes northbound. It is a fresh spring Saturday, four years and one hundred metres to the side of my first visit to the docklands. The ExCel frame reddens the west, its finish taking the morning light. The two hundred metres between the exhibitions centre and the bridge is a parking grid, white on grey, clean intervals flatten the waterfront, there are grades of supervision, enforcement and protection. All the bays are bare. I follow the guard rail to the swing bridge, passing under the tarmac lanes, to a marina chipped out of the Albert Dock. The east-facing rail has a heritage panel with an industrial plan of the dock area. A bunch of cellophane tied to the mesh, one or two stems sinking in the layers, a bleached card, a message I can’t read. Beyond it, the airport runway, the resurfaced wharf, wet lights of the corporate jets. I step back, to the brick octagon of the old pump house, to the steel ventilation pipes that curve from the deck. Preserved features. The first time I stood here, at the end of a whim, a space that no one belonged to. I didn’t think to ask what had happened and now there is no one I can ask. Out and overhead, the cars, the control cabin, the commercial aircraft.

A mile west of the Lea River, rising from the silt of the Isle of Dogs, stand the towers of Canary Wharf: a gamble on the site of the former West India Docks that, like the Royal Docks, closed for business in 1980. An abstraction that bankrupted its owners within months of completion; a symbol of the district’s rebirth, from the docklands to the Docklands, that cast long shadows over its residential neighbours; a city beyond the City, enabled by tax concessions and reduced regulations, recapitalized by a global consortium. A self-contained business district with its own border controls. The House of Numbers is a report from the interregnum, in shorthand: it shows the ground opening and closing in quick strokes, the gradual rebalancing of power. It anticipates the growth of public-private partnerships in delivering public services and infrastructure, the discreet outsourcing of security, the brash speculations of property developers. It records the weakening of bonds between communities and place, the qualitative and quantitative decline of municipal space and domestic space, slackened and shrunk to ‘cardboard apartments’. It also summons a defiant, inclusive ‘we’, the choral voice in almost every poem, nuanced and modulated by the multiple fractures of identity and territory, anonymous, polyphonic, the exhausted lament of a stateless tribe:

But we are all going away now
into some other dimension, we speak
a mirror speech there and count differently
and no one stands for the Queen any more.

‘In Silvertown, chasing the dragon’

The poems in The House of Numbers also appear in Ken Smith’s collection Terra (Bloodaxe Books, 1986) and in Shed: Poems 1980-2001 (Bloodaxe Books, 2002). A short film of Smith introducing and reading ‘Three docklands fragments’ (from the 1990 collection The heart, the border, also regathered in Shed) appears below:

A reading given by Smith at the University of Warwick in September 1984 also includes several poems from The House of Numbers; click here to listen to the archive recording (also downloadable as an MP3).

Chris Jones reflects on an encounter with Smith in his poem ‘The Reading’ (featured in his Longbarrow Press collection Skin); click here to read the poem on Chris Jones’s site.