Along a Line | Mark Goodwin

I have what could be described as a penchant for balancing along things – fence rails or tree branches or cables etc. Such balancing is intensified walking. I so enjoy the precision of toe, ball-of-foot & heel placed on solidity, and feeling for friction, as the rest of my body sways in air and pulls only against its own muscles to stay placed, and connected by feet.

As a poet I have a penchant for lines, for sound-shapes & text-shapes measured out, sometimes even in feet. The metaphor of balancer precisely stepping along a rail equalling poet is no metaphor at all, nor a symbol. Humans walk, and humans balance, and humans speak.

Very near to where I live there is a country park. It has an abundance of solid lines to balance along. One of my favourite lines is made from old railway track bolted to short pillars. This single railway rail is just a foot or two above the water of the river Soar, and it was placed here as a guard, to keep boats off the weir. Just the other day an elderly couple paused on the walkway running parallel with the rail, they watched me intently as I walked backwards along the line. When I got to one of the pillars, I stood on its rectangular top and got chatting with the couple. I mentioned to them how last summer an elderly woman, probably in her mid-seventies, had watched me just as intently as they, and that when I’d finished my walk she came over to me smiling. She was delighted, and told me that she had last walked along that very rail when she was twelve years old.

When I first started balancing in the park I was a little shy, or rather I didn’t want people to think I was showing off, so I would try to wait until no one was about. This was almost impossible, and so I was hardly getting any balancing done. And to grow the power of balance one has to do a lot of it. So, I decided that I must balance whatever, whoever was about, and that part of the practice should be to ignore whoever was watching me or speaking to me whilst I was balancing, but that once done with my balancing, should someone ask me about it I should tell them as much as I could. This practice has led me into delightful, and sometimes inspiring encounters with various kinds of people, from cheeky teenagers through to a serious but gentle Indian doctor. Most people have been inspired by my balancing and have inspired me by the ways they have questioned me.

There have been a few incidents. Once on the railway rail by the weir a lad threw a football at me. It skimmed in front of my face. I didn’t even flinch, not one teeter. My body was so focused on being in balance on the rail, that it, or was it me?, just accepted the flying object as being part of the place & the moment. I suppose sudden ducks & low-flying geese had helped in my training. In no way do I know Kung Fu! But I certainly know how Kung Fu becomes possible. But then again, most of us can tie our shoelaces blindfold and at speed. If we really watch the dexterity of someone tying a shoelace, and detach from our habitual familiarity towards that calligraphic knotting procedure, then we see that shoelace tying is Kung Fu.

To walk along a handrail by the side of a footpath is to disobey. This is, I feel passionately, what poetry should be. Poetry is just next to the conventional ways (or habits) of being human … but it disobeys, which only goes to show those conventions more clearly, even celebrate them … but certainly challenge them. 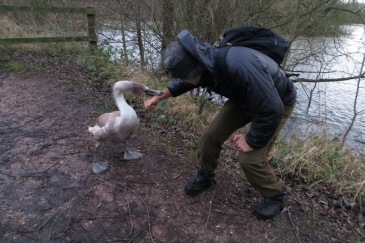 Mark being challenged by a young official in Watermead Park, Leicestershire (photo by Nikki Clayton)

I was challenged by a very young man, a very angry young man actually. He was dressed in a dark uniform, he was a park warden. I was balancing along a rail that was placed in the landscape with the intention of keeping pedestrians & feeders of ducks & such from falling into the lake. It was never intended to be a way. But this rail has been one of my ways for some years now. As the water lapped to my right this young man barked his commands at me from my left. Part of my discipline is to ignore anyone who talks to me whilst I’m balancing. So that is what I did. I regret that this only made the young man even more angry, as he protested what he believed to be my irresponsibility. However, I would not change the way I behaved at that point. What I would change is the way I tried to reason with him afterwards, tried to get him to see that should I hurt myself, well, it would only by my fault and I would have to be responsible for it. I think it is probably illegal for me to balance on this rail, and so my argument only served to anger further this young man in his uniform. I now feel that I should’ve let the young man tell me off … and once he’d gone just carried on along my way. It’s well over a year since this took place, and I’ve not seen the young uniformed man since.

The first time I balanced the thin white rail over the lock gate my fear was intense. Although I knew falling into the lock was unlikely to do me much harm. But the lock, its narrow slot, its dark obscure water – the lock holds a terror. The terror in the bottom of the lock is still there. It’s a simple terror, and a true one – it consists of no oxygen & filthy cold wet depth. No place to live in. Over the years my balance has become so sharp that walking the thin white rail over the lock gate poised breathing above no place to live where the terror still is has become a joy. I love poetry!

The short film embedded above (created by Goodwin and filmmaker Martyn Blundell) is based on a recent visit to Watermead Park, north of Leicester, in which Goodwin’s ‘rail-balancing’ is to the fore.

7 Comments on “Along a Line | Mark Goodwin”