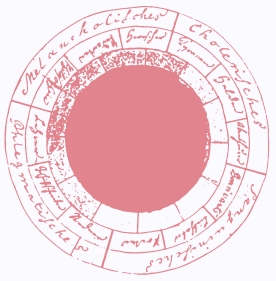 The nomenclature of colour is most inadequate.

I’m staring through the compact square of my office window at the brick wall of a neighbouring property. The double glazing has failed, misting the edges, blurring the foreground, but the brick fills half the frame, and the sun’s light hits the wall, and I say that the brick is red, the wall is red. Beyond the wall, a seam of cloud-strained blues, thinning as the afternoon frets at its tethers, the slow fade of a late English summer. I look again at the wall. It is not red, the brick is dull orange, rust brown, flame and soot. Each brick is unlike the next, each course unpicks the pattern, heat falling and rising, a stain, a bruise, a burn. The lower third is indistinct: fogged glass, coral smears. It is still a wall, a brick wall, but I can’t think of a colour. I google ‘brick red’, to find out what it means, and the image search sends back a gallery of sliced tones, taking in pastel pinks, chocolate browns, flat burgundies, dusty rose. Some of these are commercial paint, wallpaper and vinyl samples rendered as digital previews; some are tagged and coded RGB swatches aimed at web developers; and there are proprietary colour spaces, owned by Pantone and other corporations, in which tints and tones are assigned secure positions in a universal system, each colour a value, each value a constant, expressed in paint, plastics, fabrics and print. The Pantone Smart Swatch designates Brick Red as 19-1543 TCX. This is not, of course, the value that I see when I look out of my window, where the memory of clay has gone soft; nor can I match the neighbour’s wall to any of the search results, all of which claim, or have been claimed for, the authority of ‘brick red’, which now seems no more stable than the clouded blue or the misted glass. Perhaps the idea of ‘brick red’ is an idea only, a shade in the mind. Perhaps it can only exist in the space between two unlike things. Dull orange. Rust brown. 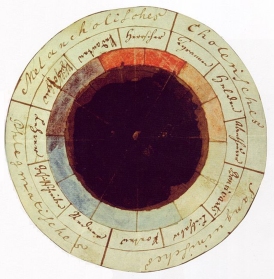 The six sonnets that comprise The Rose of Temperaments, a project conceived by artist Paul Evans and co-curated by Evans and myself, are, in essence, six responses to an invitation to think about colour, or, rather, a specific colour, arbitrarily assigned to each poet earlier this year: red (Alistair Noon), purple (Helen Mort), blue (A.B. Jackson), green (Chris Jones), yellow (Geraldine Monk) and orange (Angelina D’Roza). The original Rose of Temperaments was a colour wheel, devised by Johann Wolfgang von Goethe and Friedrich Schiller at the close of the 18th century, in which the spectrum was divided into four quarters and aligned with the traditional temperaments and their respective occupations (among them tyrants, teachers and philosophers). Goethe and Schiller’s annotations nudge the colour wheel beyond the realm of the abstract and the illustrative, linking hues to ancient humoral theory, developed by Hippocrates (460 – 370 BC), who believed that human behaviours and moods were caused by a surfeit or lack of blood, yellow bile, black bile, and phlegm. The Greek physician Galen (129 – c.200 AD) adopted and adapted the Hippocratic system for his typology of temperament, the categories deriving their names from the four humours: sanguine, choleric, melancholic and phlegmatic. Galen also hypothesised the complementary pairing of ‘opposed’ temperaments, a ‘mix’ in which we might find balance or imbalance; these binaries are also implicit in Goethe and Schiller’s diagram, where the choleric (red/orange/yellow) is ‘opposed’ to the phlegmatic (cyan/blue/violet), for example. In Goethe’s Theory of Colours (1810), the symmetric arrangement of colours on the wheel reflects the ‘natural order’: ‘…the colours diametrically opposed to each other… are those which reciprocally evoke each other in the eye. Thus, yellow demands violet; orange [demands] blue; purple [demands] green…’ 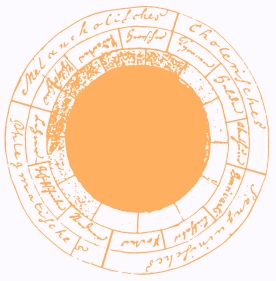 The question of how much orange might be ‘demanded’ by blue (and vice-versa) is particularly relevant to this project. Having allocated the six colours to the six poets, Evans then arranged them in reciprocal pairs (orange/blue, green/red, yellow/purple), in the spirit of Goethe’s Theory, and invited the ‘paired’ poets to ‘recolour’ a few lines of each other’s completed sonnets. In one such pairing, Geraldine Monk was tasked with adding a yellow tint to Helen Mort’s poem; Helen, in turn, might introduce a dash of purple to Geraldine’s sonnet. Both versions of each poem – the ‘original’ and the ‘recoloured’ sonnet – would be posted on the Rose of Temperaments website. It’s interesting to consider the status of these ‘recolourings’, especially in the light of the fact that Evans, whose previous collaborations with poets have emphasised his work as a visual artist (including the ongoing series The Seven Wonders, a ‘mediation’ of the Peak District focusing on new poems by ten writers, with drawings and paintings by Evans), has elected not to provide any images for the project. Arguably, the absence of illustrations serves to heighten each poem’s visual attributes and impacts, enabling post hoc ‘collaborations’ between the primary poet and the recolouring writer in the second versions of these poems; and, of course, between all six (or twelve) sonnets and their readers, the red of the poem and the red in my mind (or another red in another mind), the anticipation of the incoming green (too little? too much?). The act of reading becomes a (passing, unrepeatable) act of collaboration, the poem’s colour balance shifting in our minds with each encounter. When we contemplate a contemporary colour wheel, we see that there are no hard boundaries on the spectrum: one colour shades into another, with innumerable gradations between red and orange. Goethe and Schiller’s segmented Die Temperamentrose both simplifies and complicates the model: it is both a diagram of affective determinism, in which we find that red is for introverted rulers, and of indeterminacy, as we consider the influence of contiguous colours, and, in particular, ‘the colours diametrically opposed’. Our course (or temperament) may be set, but our position is always relative. The uncertainty of colour is, in many ways, the uncertainty of language. 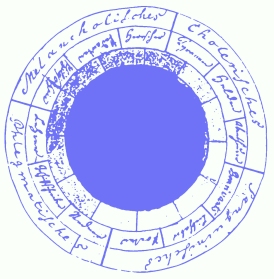 The Rose of Temperaments unfolded over six weeks in August and September 2016 (coinciding with Sheffield’s Year of Making and the University of Sheffield’s Festival of the Mind, for which the project was commissioned), a ‘primary’ sonnet appearing online every Thursday (with the ‘recoloured’ version following a few days later). The first of the poems to be made public was ‘This Sea the Colour‘, Angelina D’Roza’s ‘orange’ sonnet. It is prefaced with a tone borrowed from another poet (Tony Hoagland): ‘…this orange / and tender light // taking a position inside of me’. One more colour, a trace of which persists as the poem enacts its own shifts, toward the light of the shoreline, a promise of ‘distance’ and diminution (‘ a tiny blemish on a peach’), intimacy and absence. A moving border, on which nothing settles for long, and from which we consider the passing of seasons (the ‘pale orange snow’ and the ‘tan lines’). With only a few locational or directional cues (the land is a desert, the movement is northward), the gradations of orange become the contours of a place. The ’empty space’ is coloured in. In A.B. Jackson’s reworking, the salt shore is lightly mapped, its waters now ‘Persian-impossible’, and the last word is given not to orange, but to ‘blue’. It is hard not to think of ‘the blue of distance’ examined and explored by Rebecca Solnit in A Field Guide to Getting Lost, the second section of which starts from the limits of the visible: ‘The world is blue at its edges and in its depths.’ It is blue that ‘disperses’ in air, ‘scatters in water’, and ‘does not travel the whole distance…’ The blue of distance is ‘the colour of an emotion, the colour of solitude and of desire, the colour of there seen from here, the colour of where you are not.’ This blue, that speaks to us of elsewheres, of longings, shades into A.B. Jackson’s own poem (‘The Blue‘), which opens on a different shore: that of ‘Low Point, Nova Scotia’, a named north, an island’s edge (Cape Breton, in the east of the province). The maritime setting is the pale blue to the ‘outlandish’ indigo of a lobster that surprises a ‘fishing boat crew’; its rarity (the deep blue resulting from a uncommon gene mutation) an omen of good fortune, the colour and the luck both preserved by the decision not to cook the creature (which releases the lobster’s red pigment). Angelina D’Roza’s ‘recolouring‘ of this poem is restricted to a single line, but one which also relocates the fishing crew 1500 miles south-west to ‘Orange Beach, Alabama’, on the Gulf Coast; another blue, another distance. The poem’s preoccupation with accident and augury takes on a darker tone when we remember that Orange Beach was on the edge of the Gulf area contaminated in the wake of the Deepwater Horizon explosion and oil spill in 2010, the ocean basin bruising to black. Both versions invoke a hope, or plea, for ‘good hauls offshore / no fires below’: the thought of flame, its orange flash, returns us to Angelina’s ‘This Sea the Colour’ (‘of fire / and light’), to another shore, another Gulf.

Often, when I think of a colour wheel, I find that I am also thinking of a compass rose; the diametric opposition of colour and direction, the common centrifuge, the white point in the dead centre. Gradation and division. Is there, perhaps, a relationship between direction and colour? Since Newton’s original colour disc (circa 1670), there have been many circular diagrams, but no consensus regarding the orientation of the spectrum, no cardinal directions. Where might we find our north? Is it red? Green? Yellow? Or further off, somewhere between blue and orange?

Click here to access the index of all six sonnets commissioned for The Rose of Temperaments. Further reflections on the project will be posted on the Longbarrow Blog in the near future.

Brian Lewis is the editor and publisher of Longbarrow Press. He tweets (as The Halt) here. The second edition of East Wind, a pamphlet comprising three prose sequences and one haiku sequence, is available now from Gordian Projects; click here for further details.