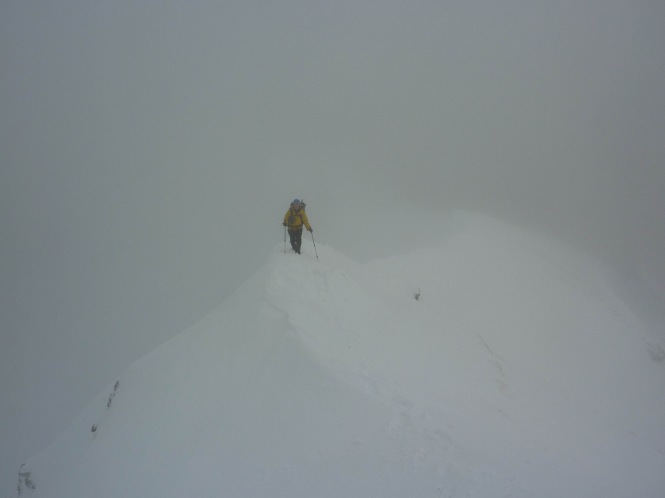 After days of snowy & iced ground, after abrupt ups and steep downs, we turn from the mountains’ tops … and so we now walk along, we walk a longa gentler un   dulating ground down in the glen. The sting of fast-thrust snow specks in the face is already from some other story. Down here in this nestling Glen Arnisdale spring suddenly begins. Sunshine unfurls its newest of oldest gestures. Our rucksacks are smaller, and our boots not so big. We need no crampons nor axes. It is like a well-earned holiday, this warm day, after the early starts for high cold tops. And holy it is as some unidentified bird pours her or his or its voice through and across the loveliness of Glen Arnisdale. This song is nearly thrush, but it is not thrush. And when we see the bird flit from tree to tree … its jizz, its gestures, its motion is not of a bird I know. I then, at that moment, or probably another moment I made or make from memory, at that some moment I remembered – I remember – how a poet called Peter Riley wrote, writes, will write … that he felt (feels) something about a place named Alstonefield mattered, mattered so very much …

Such inexplicable matter, and mattering happens for some version of me – here or there – in a Glen Arnisdale …

Photo by Nikki Clayton: Looking west down Glen Arnisdale. The mouth of Loch Hourn, The Sound of Sleat, and Sleat on the Isle of Skye can be seen in the distance.

Behind us, as we walk east, is Loch Hourn’s mouth, open to The Sound of Sleat. (And beyond the south shore of that slot of sealoch, and its sprung expression of mixed waters – fresh & salt – stands the almost fabled Rough Bounds of Knoydart, tops snow-glossed and east flanks silvered.) In front of us, to east, Glen Arnisdale’s wide pasture ends in a tight throat where River Arnisdale is squeezed between rock-knolled hill-ground. And through this throat-gate we pass into Glenn Dubh Lochain, with its two damned reservoirs, its two black lochans, set prettily and smoothly in some newly revealed scape of tangled textures. Spring’s sunlight shatters glee gorgeously sad across these dark foils. We try to stalk otters along these lochans’ frilly banks, but we see nothing, no signs at all, but I notice how I hope I am watched … 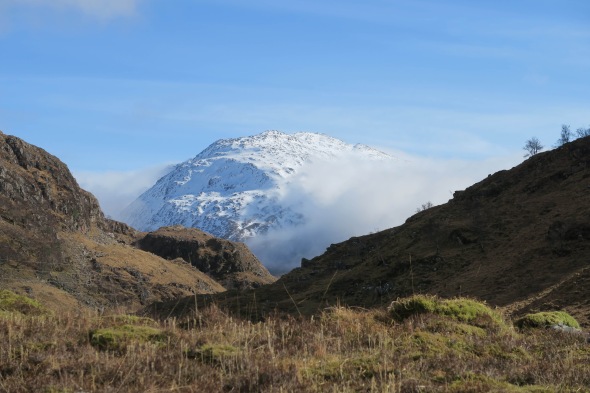 Photo by Nikki Clayton: In the glen junction, or where Gleann Dubh Lochain bends to the east, looking easterly.

And further on, and where this hidden glen t-junctions, and where burns merge, and where little pylons carrying power-lines pass, their frames’ movements through this place defined by their actually staying still within it … here, at this juncture, there are some ruins. The larger house has been sky-opened, and young rowans grow on the battlements of its crumbling. And the much smaller equally sky-seen & sky-tortured roofless one-roomed cottage to the north-west of the bigger wreck, this residency is occupied by a plant-being, an old thick-trunked rowan … and all four walls of the raw open interior are peopled by glistening green ferns …

Photo by Nikki Clayton: Looking south west down Gleann Dubh Lochain, in the direction of the small reservoirs. Dubh Lochain is Gaelic for black lochans or tarns

I never arrived at this place as much as I never left. The little pylons, and they are little, they are children pylons in comparison to the ones I know in Leicestershire, but they are also mountaineer pylons, their smallness their fury, these beautiful pylons delicate as birches … and the mature rowan growing ever older boxed in its sky-roofed cottage …. well, my self’s (or an other’s) really having existed and not existed here or else where is as …


feasible as
a dance

of pylons whilst
a stoic rowan plays

Photographs by Nikki Clayton and Boz Morris. Mark Goodwin’s publications include All Space Away and In (Shearsman, 2017) and Rock as Gloss (out from Longbarrow Press later this year). His fourth poetry collection, Steps (Longbarrow Press, 2014), explores themes of climbing, walking and balancing. Click here to visit the Steps microsite for extracts, essays and audio recordings. You can also order the hardback via PayPal below: