← The Outside Inside: Some Notes on Creative Practice | Matthew Clegg
Matter | Mark Goodwin →

Gently disintegrate me
Said nothing at all.

Outbound, a flight to the Continent, a short haul at low cost. We climb, level, and cruise, the conditions are optimal, full occupancy, fuel efficiency, no turbulence. I have a small window on the north of England, the reservoirs of the Derwent Valley, all of it shrinking, scaled to print, an island and its souvenirs. A few minutes later, a thin white filament mists the view, blanketing the shires and the passing of the shires. The connection is lost. I try to shake out the cramp in my shoulders and thighs. I resettle in my seat and pick up a book. I do not open it, but stare at the foredge, the pages rippling from head to tail, a wave that wasn’t there before, is it cabin pressure, I think, is it altitude. I look out of the window, and see gaps in the cotton, the stitches trailing off, Lincolnshire or Norfolk, stretching to a coast. At the land’s edge, rapid shifts of colour, then the blue, the first few turbines, blade over blade, their whiteness cresting as they wheel, the mudflats dark, another blue, another wind farm, 88 rotors in a rhomboid grid, the clean lines of Sheringham Shoal, a long lease in the territorial sea. Then the blue alone, the empty lanes of the German Ocean, the international cumulus, and a book drifting from my fingers. Offshore, offline. I slide in and out of Europe and the slow descent. When I come around, we are level with the landing strip. Dry air. A standstill, then sounds of dispersal, thirst, all the devices waking up.

Increasingly, our experience of connectivity is predicated on networks, systems and processes that we seldom grasp or see. While this is not an entirely new phenomenon – the dots and dashes encoded by Samuel Morse in the early years of electrical telegraphy were rapidly taken up by long-distance transmission lines, first overland, then undersea – the scale, ubiquity and complexity of our communications infrastructure has grown in inverse proportion to its visibility. If I think of connectivity, I’m likely to be thinking of glitches, of delays: the streaming media that buffers or skips; the email service that slows before a message is sent. I’m unlikely to be thinking of a data centre in Iowa or Oregon, a million square feet of client storage in a monochrome shed, or the thousands of miles that my email might travel, server to server, to complete a journey of a few seconds. Speed erases distance and the thought of distance. Our transactions, our memories, are everywhere and nowhere – at home, at work, on the move – enabled by technology that is everywhere and nowhere; the bundles of optical fibres beneath our streets, the unmarked mobile phone masts we scarcely notice at the roadside, the GPS satellites in semi-synchronous orbits. It’s embedded in the ground, in the sea, in the air, and, like most of our infrastructure, we only shift our attention to it when something goes awry.

J.R. Carpenter’s The Gathering Cloud (Uniformbooks 2017) develops this theme and, in many ways, develops from it. The project appears to have been seeded by a ‘prolonged spell’ of ‘catastrophic’ weather; the winter storms that swept through south-west England in early 2014, resulting in the inundation of the Somerset Levels, widespread power cuts and evacuations, and considerable disruption to transport, notably the breaching of the railway line at Dawlish by a coastal surge, washing away the sea wall and track ballast, leaving the rail suspended in mid-air. Further storms and cliff falls delayed the track repairs, to the extent that the link to Plymouth and Cornwall was broken for two months; during this period of closure, the vulnerability of the Riviera Line was frequently discussed in both local and national media. Carpenter tracks the reports, and is ‘struck by the paradox’ apparent in the effort to conjure ‘invisible forces such as / wind and rising temperatures’ – which can only be inferred from their effects – ‘through the material / of language’. The work that follows might be described as a journey to the heart of this paradox. Through a series of ‘modifications’ – textual fragments ranging from classical antiquity to the present day, arranged in hendecasyllabic verses – a record of theological, philosophical, scientific and cultural theories and observations about the weather unfolds. On each page, we are oriented by an idea of the cloud, the gradual refinement or expansion of its symbolic and taxonomic values, and the sense that something has been added to our store of knowledge. Despite the broadly chronological movement, in which the atmospheric hypotheses of Aristotle and Lucretius are abandoned in favour of the ‘divine’ skies of Christian mysticism, then overwritten by the meteorological studies of the Enlightenment, overtaken by the white steam of the Industrial Revolution, and overshadowed by the dark plumes of modern warfare, this is not a straightforward journey from obscurity to lucidity.

For most of human history the heavens
have served as a source of legitimacy,
providing meaning and orientation.
The sky is compass, calendar, map, and clock.

The ‘new methodological nomenclature’ devised in 1802 by the amateur meteorologist Luke Howard, which introduced the tropospheric terms that we still use today (cirrus, cumulus, stratus), enriches our descriptive vocabulary but does not dispel metaphysical doubt. ‘Clouds resist ontology.’ Weather is a process. Our attempts to grasp or represent this process through language are, inevitably, frustrated by the fact that it is, by definition, changeable. While the legacy of Howard’s On the Modifications of Clouds is foundational to our understanding of the skies, atmospheric terms are, even now, more commonly invoked as symbols of incognisance; Carpenter pauses to reflect on the origins of ‘the cloud of unknowing’ (the medieval text of this name also gives us ‘the cloud of darkness’ and ‘the cloud of forgetting’) and the ‘fog of uncertainty’ (or ‘fog of war’). We encounter the German philosopher Martin Heidegger in 1918, serving as ‘a weatherman on the western front’, ‘scanning the sky’ for propitious data, his observations determining ‘the deployment / of artillery, aircraft, and poison gas.’ From these wartime experiences, he distils a rhetoric of ‘vigilance / as a paramount ethical duty’; the discord is amplified by his later evasions and denials regarding his apparently compliant involvement with the Nazi Party. It’s a pivotal episode in the complex enquiry pursued throughout the first half of the book, which might be summarised as a subtle, sustained exploration of cognitive dissonance: in particular, the conflicts between language and comprehension, objects and their representation, data and its use. This enquiry becomes more urgent and explicit in the title sequence of The Gathering Cloud, in which the terminology of the skies is radically reframed for an age of networked computing and virtual storage. We enter The Cloud, a discreet, diffuse ecosystem with its roots in weather forecasting and wireless decryption, the scale of which is now influencing the weather itself.

The Cloud is an airily deceptive name
connoting a floating world far removed from
the physical realities of data. 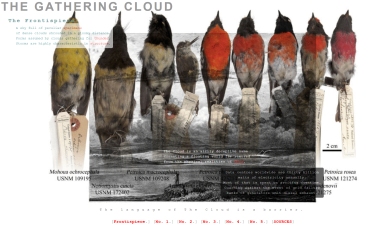 The Gathering Cloud began life as a digital project, evolving through performances and online. The web-based version is animated by a series of interactive collages, in which the engravings of cirrus and stratus that accompanied Howard’s On the Modifications of Clouds are gradually recast or obscured by images of nature and consumer technology ‘appropriated from publicly accessible cloud storage services’. These hybrid ‘plates’ are reproduced in the book, albeit emptied of colour and movement, which endows the print version with a different complexion and an unmistakable pathos. Similarly, the hyperlinks that ‘thread’ the verses of the six screen collages are dead on the page, their lost functionality denoted in ghostly grey (the 56 ‘keywords’ orphaned by this transition – from ‘aerosol’ to ‘wind’ – are listed as ‘An Index of Objects’, which lies somewhere between preface, found poem, and incantation). The effect of this presentation is twofold: it is both an intimation of a fading or failing connection to our ‘physical realities’, and an invitation to make our own connections between (and beyond) the texts. Howard’s ‘painterly’ descriptions of clouded skies (‘shrouded in a gloomy distance’) are juxtaposed with data about data:

Data centres worldwide use thirty billion
watts of electricity annually.
Most of that is spent on avoiding downtime.
Guarding against the event of grid failure
banks of generators emit diesel exhaust.

Throughout the sequence, the production and consumption of data is weighed, counted and measured in terms borrowed from the world that the expansion of The Cloud endangers; we surmise its proportions, indirectly, from the millions of snapshots of cats and sunsets uploaded and shared daily or ‘stored forever in Cloud formations’. Virtual specimens are ‘captured and tagged’ in a global image bank that runs on fossil fuel. Ironically, the habitat and species decline to which the maintenance and growth of the ‘power-hungry’ server farms contributes is partly driven by the fear of loss; much of the personal data that we hoard in The Cloud is ‘archaic, obsolete’, but we cannot bear to let it go. ‘We have saved too many memories to lose.’ One of the reasons why The Cloud’s users – ‘ordinary consumers’ – are unable (or unwilling) to recognize that ‘data is physical’ is that ‘the scale of the cloud’ is hard to depict, and hard to imagine. While it may be true that its ‘infrastructures / are successfully hiding in plain sight’, we cannot see The Cloud (except, perhaps, at its edges), or step back from it; like weather, it is both intimate and vast (towards the end of the sequence, we learn that ‘vastness’ shares its etymology with ‘waste’). However, as Carpenter frequently reminds us, clouds are not weightless, and neither are they ‘pure’: think of an early steam train, ‘engulfed in a cloud of its own making’, the air loaded with particulates. Think of the clouds we ‘exhale on a cold day’, dense, dispersing, then gone.

The Cloud is an increasingly essential
element of infrastructure powering
industry, government, finance and commerce,
as fundamental to us as plumbing and roads.

What makes The Gathering Cloud such an interesting, rewarding and valuable book is its skilful and creative reading of the cultural, environmental, and technological patterns that have given rise to the digital cloud, and which it now shapes in turn. The ‘waste’ and ‘vastness’ that define this phenomenon are illustrative of its vulnerability to crisis; it is difficult to map the contours of an artificial cloud ‘that constructs itself through pure fluctuation’, but it is not hard to conceive of a point at which its mass becomes unsupportable. Infrastructure is made visible in the moment of its failure. The book’s timelines are twice interrupted by undated sequences of photographs of the Dawlish coast, marking the occasions (in 1859 and 2014) when the water ‘broke through the line’, overwhelming the seawall and railway. Thirty-two images, high contrast, low contrast. We don’t see the catastrophe, only the shifts of light and perspective, the horizon scrolling between sea and sky, the distance sharpened or softened by cloud.

The Gathering Cloud is published by Uniformbooks; click here for further details and to order the book. The web-based version can be accessed here. Visit J.R. Carpenter’s website here.

A related essay on J.R. Carpenter’s Ocean of Static will appear on this site in the near future.