Out in the Channel, the dead water
shines like melted wax. Behind in the dark
is England; ahead in the dark, France
and everything untold. 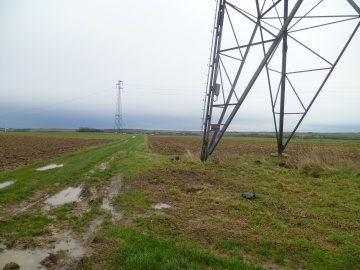 A raw winter’s afternoon. A track peters out into stones and earth, a slight slump in the middle of fields. Pylons step across the dun-grey landscape. We can see maybe two miles in each direction, a horizon of copses, hamlets, farms.
This is – more or less – where my great-grandfather Albert Brown was killed. We don’t know exactly: he wasn’t an officer, so the diary entry has only a few details, including the pencilled word ‘killed’, at the end of the brief record for the 26th February 1917. He was 37 and had been in France about six weeks; he left Annie to bring up six children.
His body wasn’t found. The buzzing pylon and surrounding scrub don’t feel like markers: we’ve just run out of track. We stand freezing for a few seconds, my dad and me; then we go back to the car.
The villages are ancient and they aren’t. Aerial photographs from 1918 show nothing but dark weals; yet here are hedgerows, huge trees, honey-stoned cottages and walls. Graveyards cluster along the lanes, the same stone cut into trim slabs and lined up, almost touching. Everything is small and close: 100 graves in a garden plot; six villages in a ten-minute drive. A dozen fields run down to the Ancre. I look at the maps from 1914, 1916, 1917. The villages disappeared but the red lines were more or less the same. Men came up that road, year after year, and were killed. When it was finished people came back, rebuilt their houses, planted trees, ploughed the land again.

Around Ypres, over the border in Belgium, farmers call it the Iron Harvest. Each year their ploughs uncover munitions, barbed wire, remnants of rifles. Sometimes the flotsam of older conflicts turns up – lead and iron from the Napoleonic Wars (known, until 1918, as the ‘Great War’) and the Hundred Years’ War.
Digging down takes me through horrors in the cultural strata. Wilfred Owen (who fought in the same fields as Albert) and David Jones; Napoleonic Frankenstein and his monstrous progeny, Goya and his; the macabre paintings of Hieronymus Bosch, who lived in the shadow of the Hundred Years’ War (three million killed); and Thomas Malory, knight, possible veteran of France, probable career criminal. Here is a rough-stitched portmanteau of French romances and Celtic myth, spun with Christian morality and nationalism for the domestic market; and at its core, capacious and contradictory, the heroic, doomed quest of a fading empire. Bones jut out of the earth: men sent to fight someone else’s battles. Those returning tell horror stories, or stay silent.

In his introduction to Malory’s Works, Eugène Vinaver is confident that Thomas Malory fought, not only in the Hundred Years’ War but later (on the losing Lancastrian side) in the Wars of the Roses. These events, along with the long list of indictments and imprisonments, make him something of a Falstaffian figure. In this context, the Tale of the Sankgreal appears to occupy the same political ground as Shakespeare’s Histories: an attempt to curry (or, in Malory’s case, rekindle) political favour in turbulent times.
The narrative, unwieldy as it often seems (ellipses and non-sequiturs abound), can be summarised around a basic theme: the attempt to resurrect national unity of a once-great polity in the face of fading influence and factionalism. The Shakespearean seed-sowing in the first pages makes it clear not only that something is rotten, but that we are invited to anticipate a tragic arc. Gawain, as Arthur’s nephew (and first champion), feels duty bound to announce the quest to find the Holy Grail with which the maimed king can be healed and the waste land made whole again. There are signs and wonders but also personal and political intrigues, centred round Launcelot (the current beste knight of the worlde) and his illegitimate son Galahad, newly arrived at court and stirring difficult emotions in his lover Guinevere. Arthur fears the worst – his grete sorowe lies in his reckoning that
my trew felyshyp shall never mete here more agayne.
A doomed adventure, then – but one in the course of which the destiny of the nation is played out through the lives and reckonings of individuals. A mask of confusion is sustained through a range of contemporary literary conventions (dream visions, ‘miracles’, and predestined occurrences) – as well as events and moods which for a modern audience bring to mind Gothic (revivalist) novels, grand guignol theatre, Bergman backlighting (school of Malory’s near-contemporary Brueghel), or the ketchup and screams of Hammer films. Whether following the dismal trails of the knights over heaths and through forests, entering the ghost ship with Percivale (where his dead sister lies, having sacrificed herself to the Grail’s thirst for blood), or witnessing the ‘elevation’ of the berserker Galahad, we are consumed by a dreadful trajectory. The achievement of the Grail by the pure means death; failure means a return to a home that is unchanged – and yet which is now estranged by the experience of those that undertook the quest. When Launcelot and Bors embrace in the final scene, we see them with a modern sensibility – as survivors of trauma.

Europe was full of wanderers
and sickness: men who’d tracked
the Grail roads and found only wastes
and dark versions of themselves.

A picture on the cover of a book, Forgotten Voices of the Great War. The book is full of personal accounts; but it was the cover, hand-coloured, that got me. Three injured soldiers walking towards us through a wrecked landscape, their faces bearing witness to horrors we can never know. They could be the ‘champions’ of Malory’s Quest who return, damaged but alive, to tell their tales of prowess, ultimately to fall quiet, broken, perhaps, by survivors’ guilt. In that story it is those who don’t return – Galahad and Percivale in particular – who are most celebrated: pure, heroic, ‘whole’ men whose sacrifice is the ultimate, ennobling destiny.
The soldiers in the photograph – two British, one French – walk in step, arms linked in fellowship. What binds them – the shared experience of war – won’t help them in their return to the everyday. The felyship of the Round Table, that necessary prerequisite to soldiery, cannot ultimately make a kingdom whole:

And ye have sene that they have loste hir fadirs and
hir modirs and all hir kynne, and hir wyves and hir
chyldren, for to be of youre felyship.

Albert signed up in 1915, before the slaughter of the Somme brought in conscription. It’s easy to imagine how a community can persuade its lads to go to war (or at least, ensure that any act of objection is made in the face of wholesale disapproval, even disgust): but a working, family man in his thirties? The 2/5th wasn’t a Pals battalion; nor was it likely, at the time of his enlistment (it was a Territorial battalion), to involve front-line service. The initial optimism of 1914 had begun to harden into a grimmer view: the sense was growing that the war would be long-lasting and attritional. In all likelihood, it was with a more general sense of ‘doing his bit’ that Albert joined up. No longer an adventure, it was still a just cause: in fact, as the casualties continued to mount, men still at home would have felt an increasing responsibility to play their part.

At home he dreamed of this:
his brothers’ bodies cast
on the mud, piled like logs
for the earth’s winter. 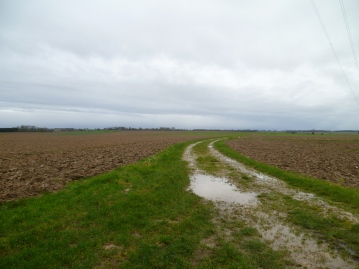 Edward Thomas was the same age as Albert when he was killed at Arras a few weeks after him – and he enlisted at a similar time. He had prevaricated, his conscience wrestling with a sense of, if not duty, then fellowship: an identification with his fellow countrymen and the physical connection with territory which is central to his poetry – and which provides a deep and enduring bond between him and his ‘tribe’. Most Englishmen in the early twentieth century had not travelled abroad, and had no sense of shared identity with ‘foreigners’. If the chain of events which led to war was political, it was nationhood, an emotional concept based on a sense of belonging – and, necessarily, not belonging – which provided an army. Though much is made of the power of community coercion – the Pals, the white feathers – millions of men joined up voluntarily in 1914–15 to protect their own against the ‘other’.
It is argued that the period of the Hundred Years’ War (1337–1453) saw the emergence of the idea of English national identity and the nation state, exemplified by the spread of vernacular English as an expression of national confidence. Though this view centres on the second half of the fourteenth century, focusing on the writing of Chaucer and Langland, it reached its fulfilment with Caxton’s printing of Malory’s Le Morte D’Arthur in 1485. Although the conflation of vernacularity and national identity can be seen as simplistic, Malory’s overtly nationalistic schema – the ‘matter of Britain’ identified as a heroic quest to restore a broken realm – is persuasive.
Those three wounded comrades emerging out of the waste land trigger, then, an identification across five hundred years of nationalist politics which draws its soldiery from an idea of ‘us’ and ‘them’. It goes on. The current rise of populist demagoguery and vicious nationalism across the West is but another, depressingly familiar tide, made possible by the limitations of human memory: those with direct experience of Western war grow old or are dead – so we are stirred by bugles more than we are appalled by horror, or feel it as physical fear. 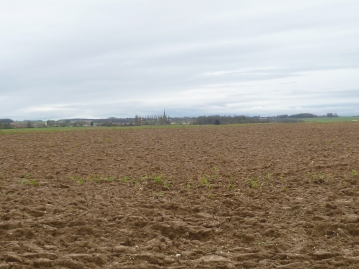 In 2014 the Telegraph published a remarkable series of photographs by Thom Atkinson. Inventories of War: Soldiers’ Kit from 1066 to 2014 showed how little had changed in what British infantry took with them into battle – until the development of automatic weapons in the early 20th century. The similarities of both arms and personal items provided further correspondence, for me, between the wars in Malory’s fifteenth century (and by extension, how he considered the experience of Arthur’s knights) and the First World War. I have interleaved the sections of The Grail Roads with short comparisons as a way of maintaining a sense of identification between the conflicts.

We drive down to the river, follow it through villages and hamlets: Miraumont, Baillescourt, Beaucourt. The road turns uphill at the station towards Beaumont Hamel, where Albert camped the night before his death (and where those of his fellows whose bodies were recovered are buried). We are banked below the open fields to our right, formerly cut by the tangle of trenches, climbing gently to the pylons at the front line. A green lane tracks along to our left. It is quieter and warmer here. The regimental diary reports the advance of Albert’s regiment on 25th February down this road ‘and thence to Front Line… Shelling of Battalion Sector by evening normal.’ The same continues the following day, with ‘Shelling of ‘B’ Co’s Sector’.

The Grail Roads is the third full-length poetry collection by Rob Hindle. A beautifully produced 144-page hardback, it is available from Longbarrow Press for £12.99. You can order the book securely by clicking on the relevant PayPal button below.

Rob Hindle is the author of several collections of poetry, including Some Histories of the Sheffield Flood 1864 (2006), Neurosurgery in Iraq (2008), The Purging of Spence Broughton, a Highwayman (2009) and Yoke and Arrows (2014). Five long poems and sequences, collectively titled Flights and Traverses, appear in the Longbarrow Press anthology The Footing (2013). The Grail Roads is his first full collection with Longbarrow Press. Click here for further details and to read poems from the book.