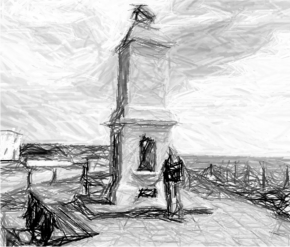 In her long poem Drift, Caroline Bergvall says, “Eventually one comes to a point where being lost can signal a starting point.” She refers to this process as “to north oneself”. This statement is an accurate description of my own long poem, Meridian. I am following the Greenwich Meridian line along public footpaths and bridleways from Peacehaven to the Humber in order to investigate the way that landscapes are disturbed and reordered by history and memory. Meridian is a long poem about time, walking and lines: lines, both real and imaginary, in all their forms. It is also a walking practice, walking in the Wordsworthian sense of “a mode not of travelling, but of being”—a process that implicates both mind and body on equal terms. I want the shape of the poem to be determined by the rhythm of walking—the measure of the step to shore up the measure of the line, alternating long Whitmanesque lines with the shorter, stepped lines of William Carlos Williams, undulating like the contours on the Ordnance Survey maps. On my walk I am in dialogue with a number of companion poets: Lorine Niedecker, Helen Adam, John Clare, Iain Sinclair—to name but a few.

I chose to write Meridian as a long poem. Charles Altieri defines the long poem as one which desires “to achieve epic breadth by relying on structural principles inherent in lyric rather than narrative modes.” To do this, the long poem incorporates other texts, voices, political speech, bits of memory whilst foregrounding the writer’s role in making her way through such often-resistant material. Indeed, the process of writing of such a text is often part of the material—it is self-reflexive. The long poem itself is a challenge—both for reader and writer, for example: how to maintain a sense of momentum and coherence, how/when to end it; choosing the most effective form. On the other hand, it offers greater space to develop ideas; it can be an ongoing work that you do alongside other projects; it offers the potential for panoramic treatment of a thing; it can bring in other registers, discourses, genres. Since the early 20th century, experiments in innovative, language-based long poems, often disjunctive in form, have been gathering momentum. In particular, I’m interested in long poems by women: Gertrude Stein’s Tender Buttons, Rosmarie Waldrop’s The Reproduction of Profiles; Susan Howe’s The Europe of Trusts, Sharon Doubiago’s Hard Country, Lynn Hejinian’s A Border Comedy, not to mention very long poems like Rachel Blau duPlessis’ Drafts. These poems often recover political, philosophical or historical material, and pay close attention to the way language, especially its rhythms, silences, gaps, conventions and expectations, engages with the reader. 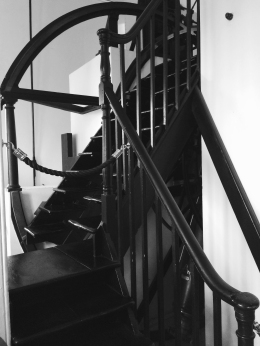 In 2015 I was beginning to think about what my next full collection would be, and I knew I wanted the work to be informed by the ideas, concepts and methods of psychogeography. Around that time I was reading books like Robert Macfarlane’s Landmarks, Roger Deakin’s Wildwood, Nan Shepherd’s The Living Mountain, Barry Lopez’s Arctic Dreams, Peter Davidson’s Distance and Memory—so I knew landscape/geography would once again feature in whatever I was to write, but ratcheting it up a notch by incorporating psychogeographic ideas.

As Guy Debord accurately said, psychogeography is a concept with “a rather pleasing vagueness.” His Lettrist International Group in the 1950s were investigating urban space through desire rather than habit. To do this, they explored different ways of getting lost: for example, by hiking through the Harz region in Germany using a London map as a guide. However, in general, psychogeography studies the affects and effects of the built environment on the emotions and actions of individuals. It embraces chance and coincidence, concurrent with an alertness to patterns and repetitions arising from the collision between the chaos of the urban environment and the personal history of the individual. It involves a range of activities that raise awareness of the natural and cultural environment around the walker; the walker is attentive to senses and emotions as they relate to the environment; it is serious but fun; it is often political and critical of the status quo. One of the key concepts within psychogeography is that of the dérive, an informed or aware wandering through a varied environment using continuous observation. Dérive = drift, aimless wandering through a place, guided by whim and the awareness of how different spaces both attract and repel. The walker attempts an interpretive reading of the city and its architecture by engaging in a playful reconstruction. This turning around (détournment) is key to the situationist agenda; it is a dialectical tool useful to expose hidden ideology.[1]  The psychogeographer is seeking new ways of apprehending the environment, excavating the past and recording it with the present, revealing the nature of what lies beneath.

My own engagement arose initially out of a particular challenge: finding my way. I can’t read a map, or a compass—and, as a result, am always lost. Not only is this a huge frustration, when lost, I am susceptible to panic attacks, so I thought I could learn the rudimentary skills of navigation whilst writing my poem. I also wanted it to have a Kentish connection, so I gradually came to the idea of the Greenwich Meridian as a way to organise the walk in time/place. (Greenwich was part of the County of Kent until 1889.) Happily, then, I discovered the series of guidebooks written by Graham and Hilda Heap, which take the walker primarily on footpaths and bridleways along the Greenwich Meridian from Peacehaven in East Sussex to Sand le Mere in East Yorkshire—total length 275 miles. Around this time, Iain Sinclair came to Kent as a Visiting Professor. I started to read London Orbital and had the opportunity to speak with him about that as well as what I was doing. His process, he explained, always seemed to happen in four parts. There is a statement of place before a stepping out into a quest/journey. That is followed by a dark night of the soul moment that tries to undo the simplicity of the journey and takes you somewhere you didn’t expect to be, then a moving away from what you created and/or segueing into the next section/project. Could this structure then be helpful to me in the way I would move forward? Certainly, there was a synergy: the trail is divided into four books, so I am using each book as a device to section the collection. Part I is Peacehaven to Greenwich; Part II is Greenwich to Hardwick; Part III is Hardwick to Boston; and Part IV is Boston to the Humber. Each Part will consist of approximately 20 pages of poetry, subdivided by the Ordnance Survey Map number which pertains to that part of the walk.

So far I have walked to Epping Forest and I intend to walk the rest of the route this summer. While walking, I record observations and events in real time; these appear on the page using indentations to indicate voice or breath change and emphasis. Before each walk, I do some basic research into the places en route, but I do not plan the content. It is very important that the poem leads me. I stop to take notes as I walk, sometimes record things into a recording app on my phone and take photographs. At the end of the day, I write up the day—and finish the section related to each walk within five days. Inevitably, I engage in “soul-wandering”, so associative leaps and digressions are made, including sensory description, bits of narrative and lived experience, mainly relating to whatever is preoccupying me at the time, the passage of time, what I am reading around that journey, and conversations—both real and imaginary.

Part II has a section called “The First Cut”. This is composed by using the cut-up method. I took every tenth sentence from “The First Walk” in Iain Sinclair’s Lights Out for the Territory. I cut the sentences up into individual words and phrases, and collaged these into the poem along with my notes and observations of the day’s walk.

And this is where I am now, about to enter Epping Forest, which I’ve been putting off because of all the stories I’ve heard of the woods’ dark reputation. I wonder what will happen further ahead, through Forest and into the Fens? And Lincolnshire?

[1] If there is an application of this concept to Meridian it is that I am trying to break through the paternalistic and geocentric relationships inherent in the L[l]ine.

N.B.: this essay was first drafted in February 2016 (at the outset of the Meridian project). The walk was completed in autumn 2017; the resulting work was published by Longbarrow Press in February 2019 (see below for further details). Click here to read ‘The Last Step’, a further reflection on the walking and writing of Meridian.

Meridian, the third full-length collection by Nancy Gaffield, is available now from Longbarrow Press. You can read an excerpt from Part II here; visit the Meridian site here; and order the book by clicking on the relevant PayPal link below.

Click here to read ‘Mirror Image’, Brian Lewis‘s recent survey of the poetry of Nancy Gaffield (by way of Eratosthenes, Solnit, Muybridge and Hiroshige) for the Longbarrow Blog.