The provincial sublime: transcendence and the post-industrial | Pete Green 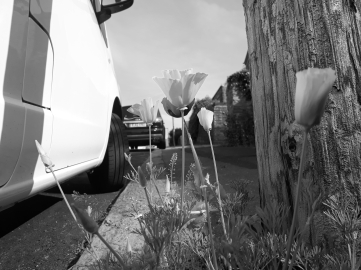 What does the word sublime mean to you? For many, it connotes the grandeur of certain natural landscapes – rugged, mountainous vistas with the potential to inspire awe, and perhaps a sort of departure from the everyday. We inherit this understanding from the Romantics, for whom magnificent scenery offers a kind of transformative power which heightens the poet’s perception.

This power typically reveals connections between the poet, the natural world, human society, and sometimes a deity or immanent creative force. These connections are often profound and esoteric, and inaccessible except through this kind of sublime revelation. When the poet comes to mediate this experience into verse, their tone is typically one of wonder, their language ‘elevated’ far above the everyday.

In Wordsworth’s case the kind of scenery that offers an experience of the sublime is found in the Cumberland fells. Other Romantic poets look further afield – Shelley, for example, to Mont Blanc in the Alps.

This experience of the sublime might have been a long way removed from the everyday lives of most people in Wordsworth’s time. But this was at least a time when those lives were largely connected quite intimately with the natural environment. After two hundred years of urbanisation in the developed world, we find ourselves profoundly estranged from that natural environment and the Romantic sublime is less accessible to most of us than ever.

True, we can take walks in the countryside. We can visit the Lake District or (if we can afford it) the Alps. On those occasions when we are permitted to ‘connect with nature’, though, our potential experience of the Romantic sublime has been pre-empted by visual media. We’ve seen those places a thousand times in photographs, film and television. We can never perceive those landscapes in the same way as our forebears in the era before mass communication.

As a reader or a writer of poetry in 2019, then, you might be tempted to discard any notion of the sublime as an experience of place. Instead I would suggest looking somewhere different.

Wordsworth’s contemporary John Clare was born into the agricultural labouring classes and spent his life in the pleasant but unspectacular landscape of rural Northamptonshire. He found glimpses of the sublime not in majestic scenery but in the smaller details: the motion of a robin, or the sounds of thawing ice and snow.

Clare demonstrates how the sublime might be reconfigured in terms of both scale and location – from the grandiose to the humble, and from the notable to the obscure. In doing this he offers us some cues towards an understanding of how we might find a kind of transcendence in poetry (and perhaps other art forms) today.

When I come across this characteristic in new poetry, I think of it as a sort of ‘provincial sublime’. It’s typically located in scenes that are ostensibly mundane or inconsequential, often marginal in some sense, often where the natural and the built environment interact. They are obscure places. They may embody some kind of social, economic or environmental dysfunction. A sort of transcendence is attained in these locations through a particular gaze, which might narrow down to those small details or expand outward into an imagined or remembered wider landscape.

If you are watching a Boeing Dreamliner taking off from Heathrow for Singapore, there is no Romantic sublime to be encountered in the humdrum periphery of west London. But you might think about the hundreds of passengers on board, and conjure some riff on the grand sweep of humanity. You might consider the many intertwined processes – technical, industrial, financial, political and personal – that have combined to lift and propel this 250-tonne mass of glass, kerosene, titanium, and human flesh and bone over your head. You might reflect that these processes can also move backwards, and when Concorde served the route the same journey could have been made 40 years ago in half the time.

Or you might focus on the gentle swaying of the rosebay willowherb at the airport fence below.

Here are two poems, with very different tones but some similarities of form, which seem to me to relate to this notion of the provincial sublime. The first is from Natalie Burdett.

you’re blossoming new curves. A warm glow skims
them, ribbons out across your city roofs
from Selfridges’ bright aluminium discs
to flick around the library’s gold hoops.

Outside, down low where nothing shines at all,
a sycamore seed sprouts against a wall. [1]

Burdett’s Birmingham is a scene not of decline and dysfunction but of renewal. The distinctive “new curves” of the library and the Selfridges building are both 21st-century additions to the landscape. Although the expansive, rooftop-roaming gaze of the first two stanzas narrows down to a human level in the third,[2] the celebratory tone remains, and the focus remains on the built environment rather than the natural. Neither prepare the reader for the quietly astonishing final couplet.

And that, in fact, is the point. The understated power of this closure derives precisely from its reversal of expectations. The richness and gleam of the regenerated cityscape, together with the convention of the sonnet form, invite the reader to anticipate an even grander, further-reaching finale. But the gaze becomes narrower still and, in a wonderfully surprising twist, shifts abruptly from the built environment to the tiny interloping organism from the natural world.

The bathos here is profound enough to prompt a reappraisal of what has gone before. Is the city’s much-heralded revamp somehow all in vain? Will human endeavour forever be overtaken by the natural environment that preceded it? Regeneration has been practised by urban planners only in the few decades of the post-industrial era – but nature has been doing it for countless millennia.

Matthew Clegg’s poem ‘Open to the Sky’ is rooted not in a city but an unnamed location, recognisably neither urban nor rural. There is no sign here of any form of regeneration, just glimpses of an inaccessible otherness.

Open to the Sky

England – my England – amounts to this:
a Hull-bound train stalling by a landfill;
gulls and crows scatter from the rubbish

and delay evolves into total standstill.
This is no more than I deserve, no less.
If I ever dream, the place is unable

to deliver. The big guy opposite
sucks on his Coke, bites deep in his burger.
He unwraps The Matrix DVD box set.

His balding fleece is endorsed by NASA.
We live on what we find. Like crows. Like gulls.
The sun ebbs and the landfill loses colour.

Lacking anything else, two teenage girls
take photo after photo of each other. [3]

If western society in the 20th century was characterised by social and technological advances in tandem, then perhaps the defining feature of the 21st is the way technology has continued to race ahead while social and perhaps cultural progress – like the train in Clegg’s poem – has stalled. Advances in technology are no longer driven predominantly by the need to solve a problem or improve society: some items and services seem to be developed and marketed simply because they can be.[4]

It’s this disconnect between possibility and reality – “If I ever dream, the place is unable//to deliver” – that defines ‘Open to the Sky’ and sets its tone of matter-of-fact desolation. The girls’ cameraphone and the mention of NASA remind us what miracles can be achieved by human ingenuity, but the concept of space exploration makes for a sharply ironic contrast with this rickety, paralysed locomotive and the predicament of its stranded passengers.[5]

In the end, while the adjacent landfill stands replete with rubbish, the stalled train comes to emblematise another kind of waste. Instead of merely salvaging scraps, how much more could all these passengers be doing now, had a functional railway already taken them to their destination, or a functional society delivered on their dreams? The image of the girls photographing each other just for something to do is not a reversal, in the style of Burdett’s closing couplet, but is equally arresting, even as it completes the sense of malaise. Outside of war poetry, it’s perhaps as complete and devastating a symbol of futility as you will ever find.

If we insist upon the notion of sublime that developed two centuries ago, in an utterly different world, then we’ll not find it in the poetry being written today in Yorkshire or Birmingham, or any other post-industrial setting. If, on the other hand, we understand the sublime to be defined by a sort of transcendence from one’s immediate surroundings – rather than necessarily by beautiful or majestic settings, and a tone of great wonder – then it is there for our taking.

‘Birmingham’ toys delightfully with our expectations, skipping adeptly between scales and scopes, and snatches us away from human vanity to point out the timeless endurance of nature. ‘Open to the Sky’ hints at a magnificence or redemption that is insurmountably elsewhere, offering a bitterly ironic kind of transcendence. In their different ways, in similar forms, both poems represent a model of the sublime that is perfectly attuned to our times.

[2] The “dust-grey faces” of the market people here reprise the “sleep-stupid faces” of factory workers in another study of the second city, by Louis MacNeice, dating from the 1930s and also entitled ‘Birmingham’.

[4] When cameraphones first became available, owners typically lacked ideas for their everyday use. For the technology to acquire a widely perceived purpose, a culture shift was also necessary; this followed later, when social media lifted some of the stigma around narcissism, as seen in the normalisation of the selfie.

[5] Regular users of Northern Rail, which serves the Hull region, will need no reminder that its fleet still comprises many obsolete Pacer units, built in the mid-1980s with an anticipated lifespan of 20 years.

Images by Pete Green. An earlier version of this essay was presented at Modern Nature, a two-day symposium (organised by The University of Sheffield) at The Hepworth, Wakefield, 25-26 April 2019.

Pete Green’s Sheffield Almanac is available from Longbarrow Press; click here to order the pamphlet. An earlier essay by Green addresses issues of civic identity and civic pride, and examines Sheffield’s status as a ‘City of Making’. Click here to read ‘Model City’.

Pete Green and Anders Hanson lead a walk through Sheffield’s Kelham Island district on Wednesday 3 July (as part of From Brooklyn Works to Brooklynism, a programme of exhibitions and free events). Click here for more information and to book tickets.

2 Comments on “The provincial sublime: transcendence and the post-industrial | Pete Green”