The Flattening & Covering Wave, an April this 2020 | Louis & Mark Goodwin

At the start of this century (centuries ago) … the little girl was sad to leave the house she’d started her life in. Her daddy said to her, one night at bedtime: “Look in your palm – there, a little Bittesby … imagine it, kept in your hand. And look, you can see twists of smoke wriggling from the chimney.”

Dad asks me to photograph the splitting driveway, the warehouse, the planted embankment and the old cottage. The warehouse looks like a wave, I think, stopped in time, high crested and mighty, sloping towards us.
.

A man, who measured out his days in places, who said of himself only what his places said of him … after an ill-ease had swept away ways, he crouched in lengths of imagined grasses, and craned his neck, and stared up at a wave of time … the way the rusty lock & the bright key, together in the sky, fight/fought like crow & kite. Impossible. Impossible to imagine. It will never happen. O the open sky, wider than any open door. It brings all. Here is (or was or will be) a man whose place name is his names’ places, the man whose ways measure spaces … in or out … and there is a man too … there … a way away … but the gap cannot be reached across.
We must not touch. This dis
placement, here, this dis
ease, here, or
there

There is litter in the trees of this once rural home – the window-view from within the front room would now be one of a digger-made mound. We walk in the garden and the warehouse-wave hides behind the house. My memories of this place all come from pictures – I know that where I stand right now is where once I sat in my father’s lap, on a bench, as Tess stood happy as flowers. How odd, to be now taller than my dad, to be watching him stare up at the long chimney and the bees that have made it their home.

[Victorian map of Bittesby. The remains of the original medieval village, unmarked on this map, lie north of the 1st big letter B. Bittesby is listed in the Domesday Book. In 1279 the village was made up of twenty-five families. Enclosure and depopulation is recorded in 1488 and 1494, and by 1536 only one family was left.]

A man made of places places his selves in a weather-faded crisp packet in the garden at the back of a lost country cottage, a cottage miniaturised in a young woman’s palm. He has also made of himself a miniaturisation, one of an array, a scale, a measurement of selves … condensed. No harm, he only places these selves of him there/here, in this plastic enclosing, to keep the rain off, should it come, he stays here/there to keep his selves dry. And now he (and his various ways) stare into the pin-sharp eyes of the mouse who has also crept into the crisp packet with him. And this mouse, with those sharp-lit eyes precise as stars … whispers, gently and kindly to him:

I am John, a poet of a kind. May I share
with you, and your kind, this new enclosure,

this further tightening of mind? It hurt when
they first parcelled all the open ground and owned

it. And it hurts still, to find all the fields
of your heart tightened into a plastic packet.

Let’s make peace – you & I – lets both nourish our
selves with honest sorrow, for what chases you

here is worse than the rat, the weasel or the cat
after me. Such a tiny, invisible particle, a protein

-something … such a new hunter …

I was one when I lived here. Mum did the dishes with me on her back. Dad had a writing office upstairs. Minnie and Jez, who are now buried here, were free to roam fields and hunt mice. We had fires in the garden and Mum and Dad had friends over and Dad was the one who could get me to sleep. I don’t remember any of this and yet somehow it lives in me as I stand here now. The day is bright, Dad is contemplative. I look at the cottage and want to tell him it looks like a museum piece – I don’t. Moss sniffs the earth and pisses on the uncut grass. I wish I had more to say about this cottage and my time here but I don’t. I’ve no memories, only feelings. This is the patch of ground, the corner of earth, where I took my first steps, first breaths, first baths and shits and burps and giggles and tears and dreams – where I smeared yogurt on my face, unaware of the ‘I’ that had a face and oblivious to the yogurt that smeared it. Everything is everything when you’re one – I didn’t watch, I saw, unable to label and name. They called me ‘The Bead’ for my wide eyes, that now weep. I don’t remember this place, but it’s where I started and its essence lives in my root. 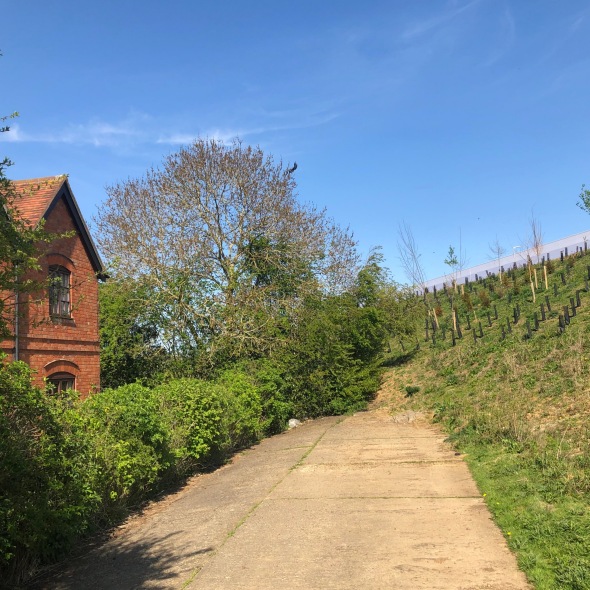 up quiet streets
across fields falls
like shadow rising

one day you walked

your streets
your fields your

day normal
is your keep

I’m jerked out of reminiscence by a pair of striding legs glimpsed through the over-grown garden hedge. I sense trouble immediately and have no doubt it’s someone coming to check us out, tell us it’s private land and that we ought to clear off. Dad turns the corner and meets him first. The man barks something like: “What are you fellas up to, then?” Dad says “There’s no need to worry,” and explains how, decades ago, he used to live here, with me. The man’s a security guard, suited and booted in black, he has a tattoo on his face wrapping his right eye and a dark beard – this suddenly says to me: ‘I’ll fuck you up’. I want to write about him, now, as if he was a horrible cunt but in reality he was actually decent and friendly. He explained that we couldn’t be here, and in fact this cottage, he said, would be ‘flattened’ very soon. Once the COVID-19 lockdown was done a bulldozer would come through here, and drive right over the cottage and flatten it. He said that over and over again. The cottage – ‘flattened’. The farm buildings down the lane – ‘flattened’. All to be turned into warehouses. I looked at him and said: “I didn’t know that … I was one when I lived here.” Why did I say that to him? As if he might say: “Oh, well in that case I’ll put in a word and see if they can save it for you!” He wasn’t keen on it being knocked down either, but not because of how much it meant to me – he didn’t know about that. He said something about how it would have done for him and his family whilst he managed the security on the warehouses. 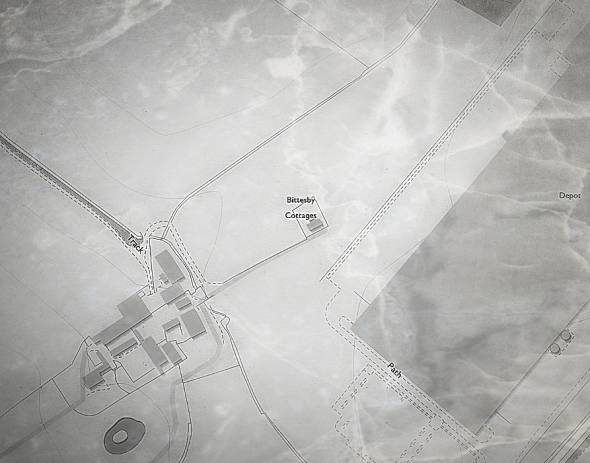 My dad said nothing. “You’re a tired old collie!” the man declared to my dog. “You wanna put her on a lead round here, the guard dogs will tear her to pieces, you’ll have a dogfight on your hands.” He escorted us out of the garden, down the lane and back into the fields where we had come from. We kept our COVID-19 social distance, and my dad said to him that he would shake his hand, but of course, we don’t do that anymore. I didn’t want to shake his hand. I wanted to live in this memory where I was born, I wanted to make it brilliant and rich with life. Later, I wept for the rabbit warrens that would be buried, the birds and insects that would be lost, the graves of Minnie and Jez that would be covered … and the beautiful bees in the chimney pot. I didn’t say any of this to my dad at the time. I joked about the security guard and swallowed all my pain. But inside, deep, in that root I felt the beginning of something, a spark of something – perhaps vengeance, or justice, perhaps a hope for the home I didn’t remember? All I know at the moment is – this land will be covered in glaring warehouse blocks, and those blocks will cover part of my root. 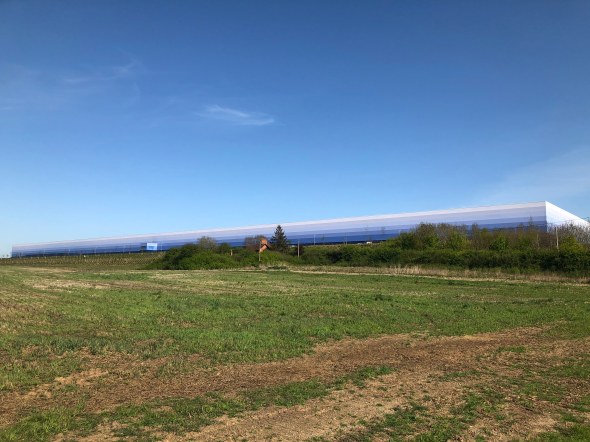 [Bittesby Cottages, Leicestershire, and ‘the great warehouse-wave’, April 2020. The ‘long chimney’, with the bees in it, can just be seen rising out of the back garden. The chimney belongs to the garden’s brick-built outbuilding, which was probably where the Victorian farm-workers’ laundry was done.]

The sonnet that has been split in two within this piece (in bold italics) is John Clare’s ‘Field-Mouse’s Nest’.

Louis Goodwin is soon to resume his actor training, but via socially-isolated webcam. He will be 21 this August.

Mark Goodwin‘s publications include All Space Away and In (Shearsman, 2017), Steps (Longbarrow Press, 2014), and a new collection, Rock as Gloss (Longbarrow Press, 2019), acclaimed by Andy Clarke in Climber magazine as ‘An exhilarating journey through the glorious variety of UK rock, including mountain rhyolite, eastern grit, Llanberis slate… a fascinating and rewarding collection that amply repays backtracking and re-reading.’ Click here to visit the Rock as Gloss microsite for extracts, essays and audio recordings. You can also order the hardback via PayPal below: 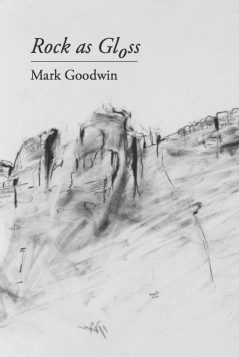