A City’s Designs: Rhyme and Structure in ‘Little Piece of Harm’ | Chris Jones

When I settled on the opening line of ‘Blue Abandoned Van’, the piece that kicks off Little Piece of Harm (‘Rhyme all the ways a city battens down…’), I already had an inkling that I wanted to write a sequence that incorporated a range of poetic forms. As part of my preparations for the project, I decided that each piece would be written around the ‘scaffolding’ of rhyming structures. I have always been taken by rhyme and form: my earliest ‘proper’ poem was a sonnet; my first published poems (when I was a teenager) were rhyming quatrains. It’s something I’ve been doing for over thirty years, though it’s worth reflecting why I decided to adopt different stanzaic forms as a way of conveying the stories in this narrative.

In general terms, I do think that the properties of rhyme help drive along the story I want to tell. The third poem in my sequence, ‘Someone Else’s Child’, is written in terza rima, triplets of rhymes that figuratively hold hands from stanza to stanza. One of the reasons I chose to adopt this design for this particular story is because I was influenced by a Seamus Heaney poem (‘I had come to the edge of the water’) from his sequence ‘Station Island’. His piece recounts the death of a friend who was gunned down by terrorists after opening up his chemist shop in the middle of the night.  Heaney’s (longish) poem zips by in the telling: partly because the rhymes cascade from one stanza to the next, those end words acting as a puttering motor that power the narrative along. The rhymes also have an element of finality about them or closure, pushing the work toward its inescapable climax. I wanted to replicate that sense of edginess and agency in my poem where a woman needs to go into school to confront her son about his potentially dangerous actions. I think the formal design of terza rima, how it makes you run on the lines and in doing so harness a persistent iambic beat, also enacts the rhythm of walking too. The two characters in the piece, Pete and Niamh, are walking down into the valley then uphill again as they converse: the formal pattern of the verse captures this embodiment of movement.

I also wanted to employ different formal structures because I hoped it would widen the tonal range of the sequence, make me explore the nuances of characters’ idiolects from poem to poem. I thought a distinctive patterned approach for each piece would mean that I would have to find new voices, new ways of articulating these significant happenings: most of the poems involve Pete, the narrator, meeting someone new on his journey around Sheffield and engaging with this bystander, this witness. For what it’s worth, pragmatically, I drew up a list of forms that I could employ – rhyming couplets, sonnet, ottava rima, rhyme royal, the Spenserian stanza, triplets and so on. When I came to begin a poem I rummaged through the forms I hadn’t used already and also reflected: how will this poem sound if I use this rhyming pattern, that prosodic template?

Without wanting to turn this into a trainspotter’s guide to English Literary Forms, the process of using these designs did make me think about antecedents I could draw on for help (or just for sustenance) as I was writing my poems. It was interesting that I kept returning to Romantic models of versifying as I went along: so, for instance, when I came to rhyme royal (stanza structure: pentameters adopting ABABBCC rhymes) I looked at Wordsworth’s peripatetic poem ‘Resolution and Independence’ for guidance. It’s also no coincidence (in terms of the thematic focus of the poem) that Pete comes upon an outlier, a woman who has turned her back on the city, in much the same way as Wordsworth’s narrator comes upon a leech gatherer out on the moors in his own heuristic encounter. When I was wrestling with the Spenserian stanza (stanza structure: pentameters adopting ABABBCBCC rhymes) I stood admiringly in the foothills of John Keats’s ‘The Eve of Saint Agnes’ – gazing up at its lofty heights. Though it’s not a lover who appears from out of the night when I riff on Keats’s cinematic poem, but a tetchy, exhausted policewoman. By the by, I thought it would be fitting for my narrator in the poem ‘A Wintering Bird’ to come on – by surprise – a taxi in the middle of the night (in the middle of nowhere) using the blueprint of Keats’s ode (stanza structure: pentameters adopting ABABCDECDE rhymes) to steer me through this chance meeting.

How successful I was in terms of modulating the tonal range of these dialogues I’ll leave up to my readership. On a compositional level, attempting all these different forms did help me persevere and work through the task at hand. At its most extreme, writing in a range of forms did actually change the way I drafted my work. The Spenserian stanza was certainly the hardest rhyme form I took on – just in terms of the abundance of rhymes I had to find from verse to verse. Usually, I pick out my rhymes as I go along – I look no more than two or three lines in front of where I am ‘standing’, to negotiate what I am going to write next (a torch-beam approach to advancement) – but with the Spenserian stanza I worked out all the end rhymes for each nine-line stanza first (on the right hand side of the page) and then in-filled the lines with ‘interstitial’ detail. Basically, you have to map out what you are going to say in each stanza before you begin the journey – it’s a ‘belt and braces’ approach I may well attempt again in the future.

On reflection, another reason why I formulated this catholic approach to design is because I enjoyed testing myself within these formal structures: the writing process was engaging, perhaps you could even say fun. I may be looking back now more dewy-eyed than the reality of it all, but I can say, hand on heart, that having this variety of forms did help me build an extended, multi-vocal narrative. The process took more years than I would care to mention – partly due to not having a clear idea what I was writing about at the beginning of the project. But one of the key things that helped me through this endeavour was enjoying the drafting process; perversely, the more difficult it got to create sense and structure, the more pleasure I had in finding new lines of progression. You have to extract gratification from the process of composition, however stuck the needle, or else there is no point in doing the writing.

I should also highlight here that not all of the poems in the sequence rhyme. One of the most pleasing aspects of developing Little Piece of Harm was finding a ‘compartmentalised’ but flexible way in which Pete could correspond with his estranged wife on the other side of the planet. I ended up devising these ‘renga’ texting pieces (after the classical Japanese form) where Pete and Kate make contact intermittently with each other via their cell-phones. I’ve also included a prose poem, and the final extended piece in the sequence is a ‘blank verse’ letter written by Pete to his son, Finn. I suppose the notion of the letter (or email) highlights how we all use forms/formats to frame those tangled, complex communications we impart to each other. Paradoxically, the formal structures I have employed here provide an open space for the utterances, speeches, conversations that spill out of the sequence, and allow for distinctive, individual voices to emerge as Pete circumnavigates this part-silenced, part-voluble city.

This is the second in a series of three blog posts reflecting on the development of Little Piece of Harm. You can read the first post here. The third post can be found here. 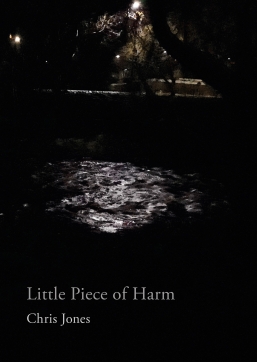 Little Piece of Harm is available now from Longbarrow Press. You can order the 40-page pamphlet securely by clicking on the relevant PayPal button below.