← Last Collection | Brian Lewis
All At Once | Mark Goodwin →

The confessions of a virtual tourist, or how and why I wrote ‘Hemisphere’ | Pete Green

Nothing is quite absolute and whether
you’re seeking or fleeing, all roads lead
home. Move far enough in one direction,
landfall always rolls around again like
dawn.

There are no roads between the 25 settlements of Nunavut and no roads connecting Nunavut to other places. If you want to go there, or if you’re there already and you want to travel from place to place within the territory, you’ll need to fly or sail.

Quite often I wonder about ‘isolated’ places ­– what it’s like to live in them, how their seclusion might feed into the way their people think and feel. So when I learned about the lack of transport to and within Nunavut, I was intrigued. The words There are no roads to Nunavut suggested themselves as the promising first line of a poem.

I wrote a few lines more and then stopped. How can you write about Nunavut if you’ve never been there? For that matter, how can you even go there if you suffer from anxiety about flying or sailing? What if you can’t afford a ticket, or you can’t get away because of your family or your job?

I thought about all the literature of place that I’d enjoyed reading over recent years. So much of this stuff was based on leisurely visits to places like Alaska, Greenland or Canada. Places that would be impossible for someone like me to reach. Even Scandinavia, Ireland, and the Hebrides seemed to belong to another world, which was closed off to me.

This writing was made possible by talent but also by a favourable alignment of the stars. The authors’ domestic, professional, financial and psychological circumstances all fell into sync, allowing them to travel far enough and long enough to confer credibility on the text.

Much of this work is wonderful, and my life would be diminished without it. But when any body of literature is produced by an unrepresentative social subset there will be consequences. It’s bound to be limited in perspective. And it’s likely to have an excluding effect, as people outside that subset look in and feel there’s no place for them there.

An excellent recent anthology of memoir-based place writing is Ground Work, edited by the admirable Tim Dee. [1] One chapter describes a cottage in a picturesque and remote part of Karelia, a region spanning the present-day border of Finland and Russia. The author, a professor at a British university, explains that “as a family, we have often spent our summers here”.

Even while I continued to enjoy the writing, as a reader from a working-class background something inside me braced and tipped at this point. Triggers like this were essentially the reason why, as a young person, I lost any sense of a potential place for me in the literary world and gave up writing poetry for 20 years.

Class is far from the only component of identity where barriers emerge – in place writing, as in society. In his introduction to Ground Work Dee laments that he “failed to find anything other than white contributors”. Jessica J Lee, editor of The Willowherb Review – a journal dedicated to diversifying the social composition of nature writing – reflects:

It’s… a bit of a chicken and egg problem. If writers of colour in particular don’t see themselves reflected in publishing, writers considering entering the field might not pursue it. With nature writing, I think, that’s a particularly acute problem. Because it’s not just the publishing barrier; it’s the nature barrier, the fact that communities of colour don’t see themselves represented in natural spaces or in environmental movements. We have such low numbers statistically of people of colour visiting national parks, which compounds the issue. [2]

The poet and essayist Kathleen Jamie goes a step further in sketching out a recognisable stereotype of the place writer:

…when a bright, healthy and highly educated young man jumps on the sleeper train and heads [to Scotland], with the declared intention of seeking ‘wild places’, my first reaction is to groan. It brings out in me a horrible mix of class, gender and ethnic tension. What’s that coming over the hill? A white, middle-class Englishman! [3]

Place writing has issues, then, with the social composition of its authorship, and there are good reasons to try and address these. Meanwhile, if you’re a place writer and your circumstances mean Nunavut is out of reach, what are your options? One is to shift the focus and follow the old dictum of writing about what you know.

Kevin Boniface’s Round About Town [4] is a diary of observations made by the author while on his delivery rounds as a postal worker in small-town Yorkshire. His human tableaux are neatly sketched, but the real art lies in the author’s restraint. The scenes are sometimes charming, often absurd, occasionally dysfunctional, and Boniface leaves you to decide which is which.

For another example, Gareth E Rees’s Car Park Life [5] is a sort of post-psychogeographical survey of, as the title suggests, car parks up and down Britain. You can’t quite tell where his self-deprecation ends and the serious stuff of social observation and history begins – which can be a bit disorientating but is completely apposite.

Both of these are engaging reads, representing place writing at its most vital and relevant. But I’d already written about what I knew. My first pamphlet of poetry, Sheffield Almanac, [6] is an extended study of the place I’m more familiar with than any other. Its observations came from several years of walking Sheffield’s hills and rivers, sitting on buses and in pubs, absorbing the voices and currents of the city.

And while Sheffield has the M1 and the A57, there are no roads to Nunavut. This continued to fascinate me (in the old sense of the word, which implies a certain helplessness and compulsion). I wanted to write about Nunavut. And I didn’t know how, because I had never visited the place and quite possibly never would.

Then I remembered the most beautiful book in my house – the Atlas of Remote Islands by Judith Schalansky [7] – and its devastating subtitle “Fifty islands I have not visited and never will”.

In her preface Schalansky writes of growing up in totalitarian East Germany, where Olympic athletes were the only citizens allowed to leave the country. Inspired by a nature documentary about the Galapagos Islands, she reaches for an atlas. Her finger crosses the Atlantic to South America and traces the coastline around Tierra del Fuego, before her mother points out the short cut of the Panama Canal: “And thus I undertook my first voyage round the world.”

Schalansky goes on to characterise the appeal of isolated locations and explore the deeply nuanced nature of both the making and the reading of maps. For the extreme islomaniac, compelled to obsess over places like St Kilda and Tristan da Cunha, reading an atlas is a transaction predicated on a desire which can never be fulfilled. And if its end is impossible then this frustrated desire becomes an end in itself:

This longing will always be great, far greater than any satisfaction to be had by attaining what is desired. Give me an atlas over a guidebook any day. There is no more poetic book in the world.

Entries in the Atlas of Remote Islands comprise historical anecdotes which may be fact, fiction or a bit of both – but to dwell on the issue of veracity, Schalanksy says, would be to miss the point.

All text in the book is based on extensive research and every detail stems from factual sources. I have not invented anything. However I was the discoverer of the sources, researching them through ancient and rare books and I have transformed the texts and appropriated them as sailors appropriate the lands they discover.

Here was my lightbulb moment. What if I returned to my Nunavut poem having taken a leaf from Schalansky’s book? What if I continued to write about the place, but in a new way, which would acknowledge that I’d never been there?

There was no need, I realised, to write as if I regularly hang out in downtown Iqaluit and hope nobody would notice that I was faking it. Instead I would embrace and even foreground the fact that my knowledge of Nunavut was second-hand. Rather than ancient and rare texts, I would transform and appropriate material from Wikipedia, YouTube and Google Earth. I would acknowledge that these sources might be unreliable, and make it part of the poem.

Over time my poem would acquire a protagonist who was journeying westwards around the northern hemisphere. Beginning in the Outer Hebrides, he would sail to Iceland and Greenland, travel on to Canada and Siberia, and return to Europe via the Arctic archipelago of Svalbard. The narrative would go into detail about the landscapes and people he would encounter. It would refer occasionally to the limiting circumstances of his life back at home. And it would suggest, in one or two places, that the entire trip was necessarily imagined or virtual.

Hemisphere is available now as a short book published by Longbarrow Press. It won’t rectify all that is unrepresentative and skewed about the perspectives of place writing. But among its several concerns is an invitation to consider who is allowed to write about places. Consider this invitation extended to you. 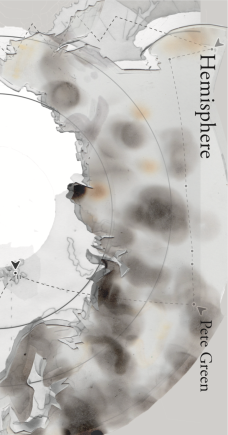 Hemisphere is published by Longbarrow Press as a 48-page ‘short book’, with illustrations by artist Abi Goodman. You can order the book securely by clicking on the relevant PayPal button below. Click here to read the first section of Hemisphere. Join us for the online launch of Hemisphere on Thursday 2 December 2021 (7.30pm start, free); click here to register.